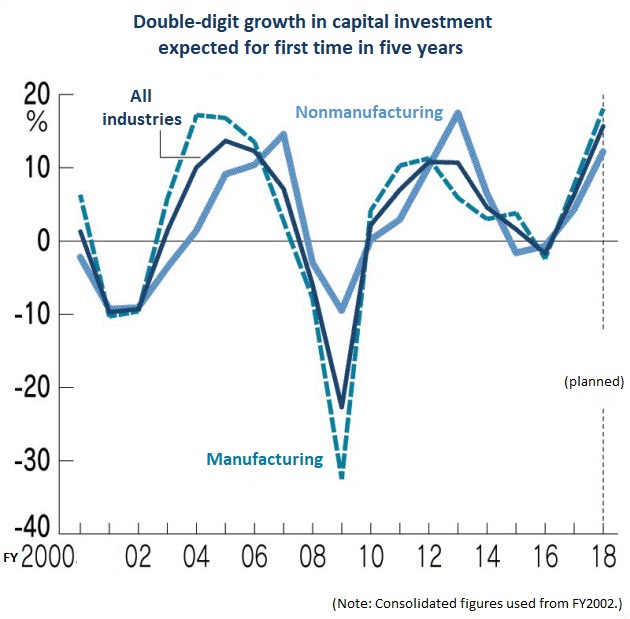 Corporate investment in equipment and facilities across all industries in fiscal 2018 is about 1% less than what companies planned at the beginning of the fiscal year (according to their revised plans as of the end of October), a Nikkei study has found. Nonetheless, the revised estimates represent a 15.7% increase over fiscal 2017. Companies are enhancing their competitiveness by strategically investing their corporate resources in auto parts, next-generation communications, and other new growth fields.

The study covered listed companies as well as privately held companies with capital of at least 100 million yen. Some 1,331 companies responded to the survey. Results were tabulated based on 1,171 companies, excluding companies with consolidation ties. Across all industries, companies are investing 28.8179 trillion yen in equipment and facilities in fiscal 2018, up 15.7% from last fiscal year. Manufacturing companies plan to invest 17.5441 trillion yen, up about 18% year on year, and non-manufacturing corporations have said they will invest 11.2738 trillion yen, up about 12%. Manufacturers and non-manufacturers alike now look to spend about 1% less than initially planned. Precision instrument companies are increasing investment by 3.6% from their initial plans, while construction companies are raising their capital investment by 1.8%.

Hitachi High-Technologies Corporation increased its capital investment by 3.4 billion yen from its initial plans, a 14.3% rise. In its electronic devices business, including its core product of semiconductor manufacturing equipment, it expanded its development facilities and enhanced its demo equipment for electron microscopes and other products. Semiconductor manufacturers are postponing investment, but Hitachi High-Technologies sees demand remaining firm for the medium to long term. 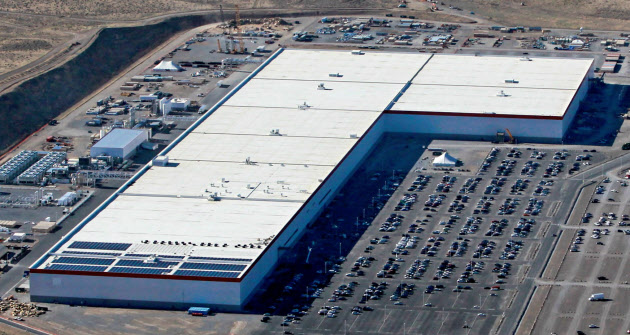 Panasonic is enhancing production capacity at its battery plant [in Nevada]. (photo courtesy of Reuters)

In the electrical machinery sector, companies are eager to invest in promising fields, including those related to autos. Panasonic plans to invest 380 billion yen. The company is prioritizing fields related to autos and will invest 241 billion yen in those fields. The details have not been released, but the majority of the investment will be used to beef up capacity for battery production with sights set on selling to America’s Tesla.

Toshiba also increased its investment by 15 billion yen. The company is building a framework to increase production of next-generation lithium-ion batteries, which its consolidated subsidiary Toshiba Infrastructure Systems & Solutions Corporation is engaged in. The company produces long-life and fast-charging batteries, which will see increasing demand from such fields as railways, electric power, and automobiles.

Shimizu Corporation will increase its initial investment figure by 6 billion yen. The construction costs of some of the company’s real estate development projects have ballooned, including those for an office building in Yokohama and a logistics facility in Niiza City, Saitama. 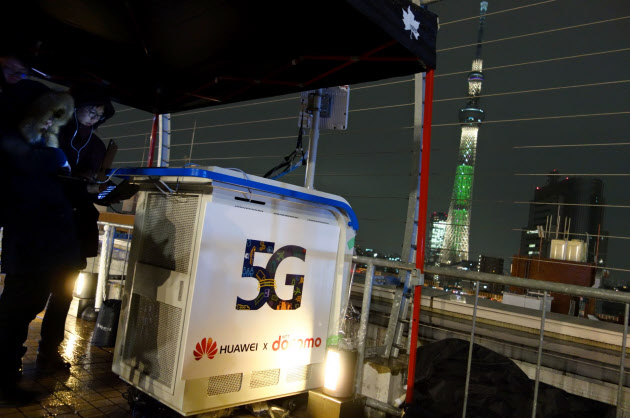 NTT Docomo is increasing its investment in 5G with pre-services on the horizon.

NTT made the largest upward revision of any company. It increased the investment figure it announced in the spring by 20 billion yen to reach 1.72 trillion yen. NTT Docomo will invest an additional 10 billion yen to launch 5G pre-services from September 2019. The new services will offer a transmission speed 100 times faster than that currently available. In collaboration with various companies, it will develop 5G services that take advantage of the new system’s feature of having virtually no time lag in communications.

In contrast some companies are reexamining their capital investment plans. Canon implemented the largest downward revision of any company in the survey, slashing initial plans by 20%. Although it is not abandoning any large-scale investment projects, the imaging products maker says it will focus on debt repayment to strengthen its financial health. Japan Tobacco is scaling down its capital investment plans by 13.1%. It invested in manufacturing facilities for new products in Japan and overseas, and it held down necessary expenses more than it had anticipated.

The U.S.-China trade conflict and other factors are making it hard to read the future, and this may impact companies’ attitude toward investment. Companies are being called to exercise caution in their management, as they monitor major global developments like Brexit. 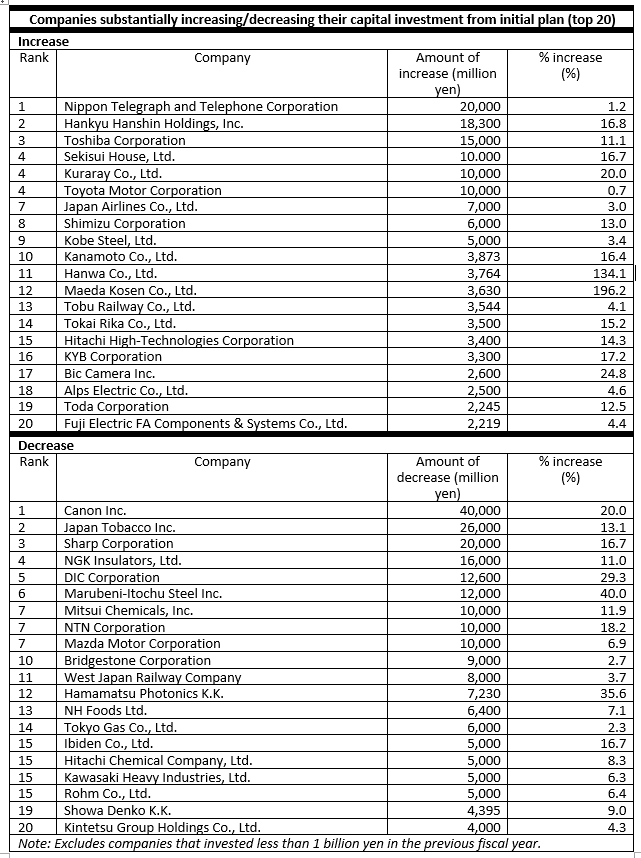