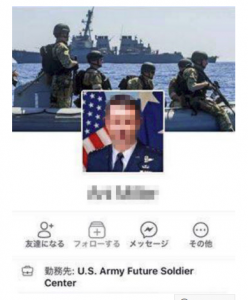 “International romancing frauds” have been rampant. Swindlers try to extort money from women by sending messages from overseas on social networking sites and court them with sweet words.

A woman in her 40s, who lives in Tokyo, is under pressure repaying her debts every month. She is single and lives alone. She has taken out loans to the tune of 2.5 million yen from financial institutions for a “lover” she has never met.

It all began in February 2017. She found an SNS message on her smartphone, which said, “Would you make friends with me?” The sender said he is an American man who is working as a photojournalist in war-ravaged Syria. The man also attached a photo showing him ready to take a picture in the battlefield. They started exchanging messages in English.

The woman sent her photo to the man. He got back to her in quick succession, saying, “You’re beautiful” and “You’re nice.” They even began talking on the phone. “I was crazy about him,” she says. But she tried not to care about the man’s unnatural English pronunciation.

One month later, they made a promise to marry in Japan. But shortly after that, the man said, “I got shot in my leg” and asked her to send two million yen for surgery. So she made an international money transfer from a post office, taking out a loan from a consumer finance company and reaching into her savings. The next time, she took out another loans and sent him one million yen. When she was about to send money from the same post office for the third time, a teller told her that she might be tricked. That brought her to her senses. “The photo was fake. Everything was a lie,” she says.

In Japan, the civil group “Kokusai romansu sagi bokumetsu kyokai [association for eradicating international romance frauds]” in Kashiwa City, Chiba Prefecture, in November conducted a fact-finding survey of some 350 people who sought help from the association. The survey found that 41 out of 87 respondents faced demands for a large amount of money “more than 1.01 million yen.

The survey also found that many of those who sent messages identified themselves as a “serviceman” or “army surgeon.” They also pretended to be serving in Syria and misused photos of U.S. military personnel that were available on the Internet. (Abridged)