Japanese and Americans differ in views on punitive tariffs against China, Yomiuri-Gallup poll 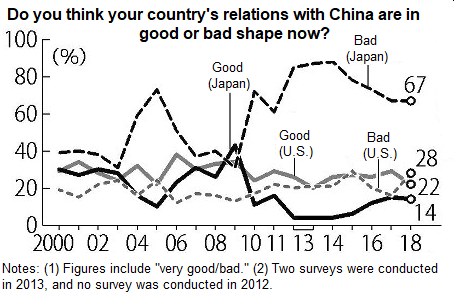 This deterioration in Americans’ assessment of their ties with China is thought to be influenced by the confrontation between the two countries over trade. Since July this year, the Trump administration has slapped tariffs on $250 billion worth of Chinese products. China countered the move by imposing retaliatory tariffs on U.S. products. Japanese and Americans viewed these economic sanctions against China differently. Some 50% of Americans said they “approve” of them while 47% of Japanese said they “disapprove” and only 35% said they “back” them.

Many Japanese and Americans said that “U.S. should maintain its military power at the current level” in the Asia-Pacific region, where China is gaining in influence. Some 62% of Japanese (61%) and 62% of Americans (62%) gave that response.

Asked if they thought that the United States or China would lead the world in the future, some 67% of Japanese said “the U.S.” and 14% selected “China.” Some 62% of Americans selected their own country, exceeding the 29% who said “China.” Some 20% of those Americans selecting China were Republicans while 37%, or nearly twice the percentage, were Democrats.

[Polling methodology: The survey, both in Japan and the United States, was conducted nationwide over the telephone on a computer-aided random digit dialing (RDD) basis, with people selected from the two countries’ respective voting populations. In both countries, the survey was carried out over landline telephones and mobile phones.