Japanese and Americans both see DPRK, China, and Russia as “threats,” Yomiuri-Gallup poll 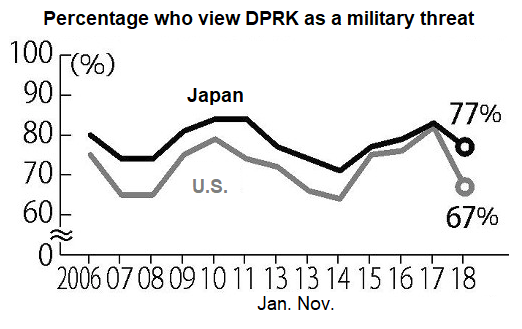 The Yomiuri-Gallup poll [conducted on Nov. 26–Dec. 3] asked respondents if there is a country or region that they think will become a military threat to their country (multiple responses permitted). Some 77% of Japanese respondents said the “DPRK,” down from the 83% found in the previous poll [conducted in 2017], making it the most frequently given response for the third year in a row. Second was “China” at 75% (67%), and third was Russia at 62% (50%). The percentage of Americans who indicated “DPRK” as a military threat to their country was also down at 67% (82%). Nonetheless, it tied “Russia” as the most frequently given response by Americans. “Russia” rose to 67% from the 55% found in the 2017 poll. The third most frequently given response among Americans was the “Middle East” at 64% (63%), and the fourth was China at 60% (51%).

The drop in the percentage of Japanese and Americans citing the DPRK seems to reflect the relaxation of tensions on the Korean peninsula through the inter-Korean summits and the U.S.-DPRK summit held this year. At the time of the previous poll conducted last year, many had a sense of crisis over the DPRK because of its nuclear weapons tests and repeated missile launches.

In contrast, the recent poll found that more Japanese and Americans sense a military threat from China and Russia. These results are thought to reflect the deterioration of U.S.-China and U.S.-Russia ties over trade and nuclear disarmament, respectively.

[Polling methodology: The survey, both in Japan and the United States, was conducted nationwide over the telephone on a computer-aided random digit dialing (RDD) basis, with people selected from the two countries’ respective voting populations. In both countries, the survey was carried out over landline telephones and mobile phones.