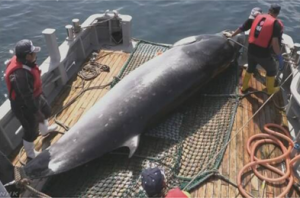 All broadcasters reported on Chief Cabinet Secretary Suga’s press remarks this morning on Japan’s withdrawal from the International Whaling Commission, quoting him as saying: “We’ve been trying to seek a solution over the past 30 years with the goal of undertaking sustainable commercial whaling. However, no concessions have been made by countries that only attach importance to the protection of whale resources. As this year’s IWC conference in September reminded us again that it is impossible for those who pursue the sustainable use of whale resources and those who seek their protection to coexist, we’ve decided to withdraw.” As for Japan’s plan to restart commercial whaling next July, the government spokesperson said it will be carried out only in Japan’s territorial waters and exclusive economic zone but not in the Southern Ocean or the Southern Hemisphere. He added that the total catch will be within the limit adopted previously by the IWC. Suga added that Japan may seek to launch in the future a new multinational framework for whaling separate from the IWC and that Tokyo is hoping to hold a meeting every year with countries that share the goal of sustainable usage of whaling resources.

According to NHK, if within the year Japan notifies the United States, which is the depository government of the International Convention for the Regulation of Whaling, of its plan to leave the commission, it may withdraw on June 30 next year.

The national dailies published similar stories, noting the international community’s strong reaction to Japan’s withdrawal and expressing doubt about whether in the face of the backlash Japan can resume commercial whaling next year as planned.