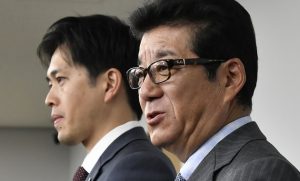 NHK reported that Osaka Governor Matsui and Osaka Mayor Yoshimura have decided to step down together next year to achieve a breakthrough in the stalled “Osaka Metropolis” initiative that they have  pursued for years. The two politicians are reportedly inclined to give up their posts and run in the by-elections to be potentially held in April in a bid to ask local voters for a renewed mandate to move forward with the initiative, which is intended to realign the governments of ordinance-designated cities with the prefectural government. The two leaders are reportedly increasingly at odds over the initiative with the local chapter of the Komeito Party, which is strongly opposed to the two officials’ desire to hold a referendum on it in July next year.