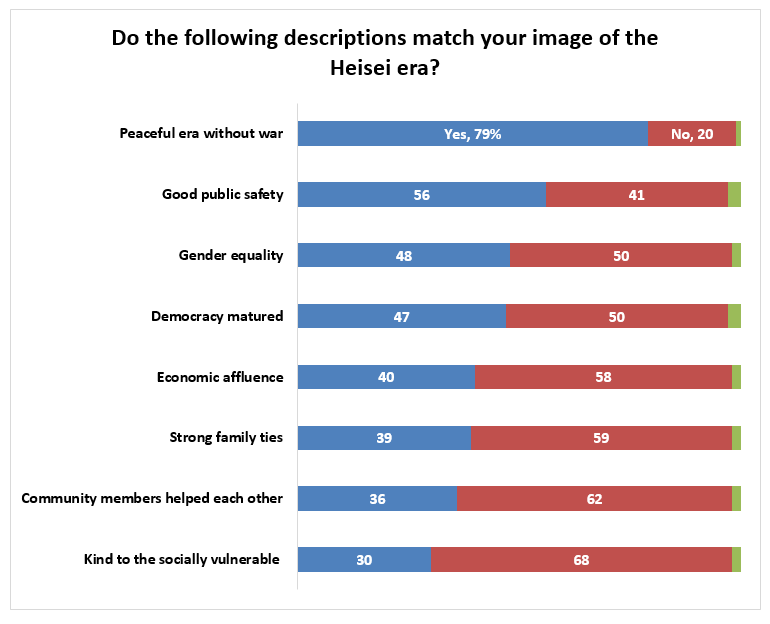 Ahead of the change in the era name from the current “Heisei” in May this year, NHK conducted a nationwide public opinion poll to probe views on the Heisei era. Some 79% of respondents characterized the era as “a peaceful era without war” while only 30% described it as “an era that was kind to the socially vulnerable.”

NHK conducted the survey by postal mail from September through November 2018 on a random sampling basis and targeted 6,000 men and women nationwide aged 18 or over. Valid responses were received from 3,554 of the people polled for a valid response rate of 59%.

88% say the “telecommunications environment” improved during the Heisei era

Asked to assess whether Japan improved or deteriorated with regard to 10 items during the Heisei era, some 88% chose “telecommunications environment,” 82% cited “transportation network,” 75% picked “disaster prevention,” 65% cited “healthcare and the welfare systems,” and 55% selected “education.” Meanwhile, only 49% cited “public safety,” 40% picked “employment and labor environment,” 26% chose the “nation’s economic power,” 25% selected the “international environment surrounding Japan,” and 22% cited “trust in politics” as areas that improved during the Heisei era.

Men, women differ in their perception of the Showa and Heisei eras

Hiroshi Shiratori, a Hosei University professor specializing in the history of the Heisei era, comments on the poll findings: “I think many people have an image of the Heisei era as being a peaceful era free of war because it contrasts with the first 20 years of the Showa era, which are strongly associated with war. People in their 40s, 50s, and 60s remember that Japan steadily developed and surpassed many nations during the Showa era so they think the era was a good one. Once we move to those age 70 or over, though, some find the peaceful Heisei era better because they have strong memories of the war even if they are mixed with some nostalgia for the Showa era.”