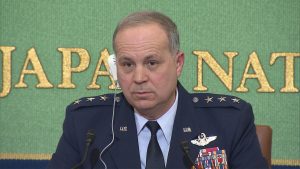 All national dailies except Yomiuri highlighted a press conference at the JNPC on Wednesday by USFJ Commander Martinez, who reportedly dismissed the idea of basing U.S. troops in the Northern Territories if they were returned to Japan. “At present, there is no possibility of deploying U.S. forces to these islands,” said the Air Force general, who added: “We hope that constructive dialogue will take place [between Japan and Russia] to resolve the longstanding territorial dispute.” The USFJ commander also commented on the FRF construction initiative off Camp Schwab by saying: “We are aware that it has become a major controversy…. We hope the Japanese government and Okinawa will continue dialogue and cooperate to find a solution.”