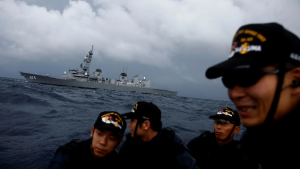 TOKYO — Japan is strengthening its relationship with the so-called Five Eyes — an intelligence pact among the U.S., the U.K., Canada, Australia and New Zealand — as China expands its military might and information-gathering operations in the Asia-Pacific region.

Prime Minister Shinzo Abe will stop by the U.K. Thursday during a tour of Europe to meet with British counterpart Theresa May. The leaders are expected to agree to advance cooperation on Japan’s “Free and Open Indo-Pacific” strategy, a counterweight to China’s presence in the region. Britain is an originator of the alliance between English-speaking nations.

The multinational war games have been held 12 times since 2001, mainly among the Five Eyes members. Japanese agencies participated in simulations of how their satellite systems could aid the U.S. if American space communications were attacked.

Japan will also deepen cooperation with Five Eyes members to prevent cargo smuggling by North Korean ships on the sea.

Aircraft from the U.S., Australia, Canada and New Zealand have been tasked with the bulk of surveillance, although British naval vessels also patrol the South China Sea. Japan has shared pictures of North Korean smuggling with each nation.

Coordination between Japan and the intelligence-sharing allies in the digital and telecommunications fields has also gained attention.

The Five Eyes members accused China-based hacker group APT10, which the U.S. believes is linked to Beijing’s Ministry of State Security, in December of trying to steal intellectual property. A Japan Foreign Ministry spokesperson issued a rebuke of the hackers soon after.

“The Self-Defense Force is highly interested in the information on the Chinese military that the Five Eyes have gathered in the Sea of Japan and South China Sea,” said a Japanese government official.

The U.S., Europe and Japan also share a sense of concern about China’s rapid growth in the field of data.