OSAKA – Like other major cities around the world, Tokyo acts as a magnet for the rest of the country, attracting people whose energy and talents spark new businesses and forms of art and culture, which, in turn, attract even more people.

But for other cities in Japan, Tokyo’s boom is their bust, as the exodus of locals — those precious human resources — leads to depopulation.

Now, Prime Minister Shinzo Abe’s administration is taking another stab at this decades-old trend, unveiling a plan in late December to designate 82 regional cities in 43 prefectures as core urban centers, to which central government assistance will flow if their ideas for economic revitalization are approved by Tokyo bureaucrats.

While some mayors hail the program as a lift to efforts already underway among local governments, there are concerns the program could end up creating a nation of “mini-Tokyos,” or regional urban centers that drain people from rural parts of the prefecture.

Under the initiative, the government will provide funds to select regional cities that present plans to improve downtown areas and create more compact urban areas to serve residents and surrounding communities more efficiently, and at less of a strain on municipal budgets.

It is also aimed at encouraging younger people to stay in regional centers by providing funding and support for efforts to make it easier for them, especially women, to find work in those cities. The government will also provide incentives for the municipalities to welcome some of the 345,000 foreign workers Japan plans accept over the next five years, starting in April.

Local politicians and media have described the new regional core city plan as functioning like a “dam,” stopping the outward flow of people from other parts of the country into Tokyo.

Sendai Mayor Kazuko Kori says she hopes the city would not only be a “dam” for the Tohoku region but also function as a “pump” that would attract people from neighboring prefectures and then encourage them to go to other parts of the region.

“Sending out people not to the Kanto region but to Tohoku to act as a pump is what we’re seeking,” she said during a news conference on Dec. 25, following the designation of her city as Miyagi Prefecture’s only regional core city.

Over the past decade, efforts to stop the flow of people into the Kanto region have largely failed.

The number of people who moved to the prefectures of Tokyo, Kanagawa, Saitama and Chiba minus the number of people who moved out was 151,696 in 2008, according to the internal affairs ministry. At first, it appeared there was some success, as the figure gradually dropped to 62,809 in 2011. But it continued to increase from there on, with the figure reaching 119,779 in 2017.

As regional depopulation continues due partly to the movement of people and funding to Tokyo, cooperation between local governments working with fewer resources is increasing.

In northern Kyushu, 17 cities and towns centered on Kitakyushu with a combined population of 1.4 million are working together to create a more unified economic and residential area, and Kitakyushu Mayor Kenji Kitahara sees the new plan for core cities as being to the region’s advantage due to its transportation infrastructure.

“Various local governments are facing aging and declining populations with lower birthrates. At the same time, in our area, Kitakyushu Airport and Fukuoka Airport are congested, so, in a variety of ways, the wind is at our back,” Kitahara told local reporters on Dec. 24.

Yet other regions of Japan are expressing caution and concern.

In Hokkaido, where Sapporo, Hakodate, and Asahikawa have all received regional core city designation, the idea is to create three hubs.

However, with New Chitose Airport, the prime domestic and international gateway to Hokkaido, Sapporo is becoming a magnet for people from other regional cities, including Asahikawa and Hakodate.

In Kyoto Prefecture, where only the city of Kyoto has received the designation, the Kyoto Shimbun expressed fear that the plan, rather than benefiting regions, could wind up only benefiting the designated cities.

“There are concerns that all the new policy of attempting to concentrate local populations in core cities will do is create a bunch of ‘mini-Tokyos,’” the Kyoto Shimbun editorialized on Dec. 20.

The newspaper also warned that many, perhaps most, of the estimated 345,000 foreign laborers could end up in major cities rather than in rural parts of the country.

The Abe government has said that assistance to help local communities “coexist” with foreign workers would be available, but the details are limited and many local surveys of smaller businesses in regional cities show a lack of enthusiasm for foreign workers, except in a few sectors such as tourism.

Perhaps the most difficult task the designated regional core cities will face is overcoming the reluctance of Tokyo-based corporations to relocate, even with new inducements, including local tax incentives and other plans to get them to move. And then, as the Kyoto Shimbun points out, there is the group of Tokyo-based workers who are likely to put up especially stiff resistance to supporting the regional core city movement by relocating, and that’s the bureaucrats themselves.

When it comes to the regional core city project, then, the idea seems to be to keep people from moving to Tokyo via a policy dam, while local governments and businesses around the country see a pump that pushes people and businesses from Tokyo outwards as the real instrument that will drive regional revitalization. 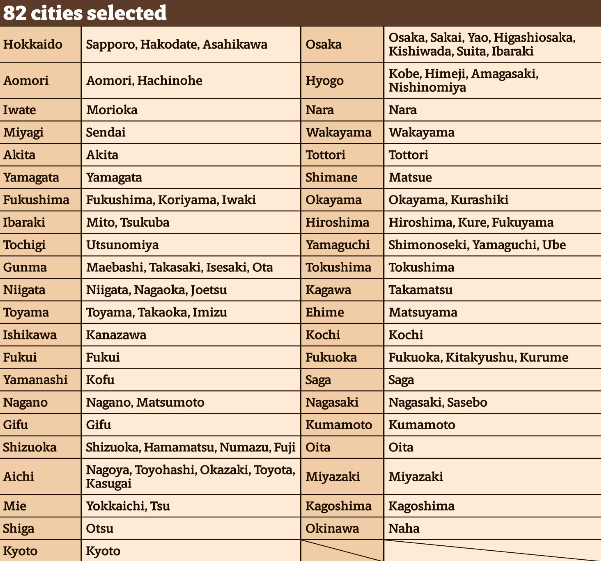