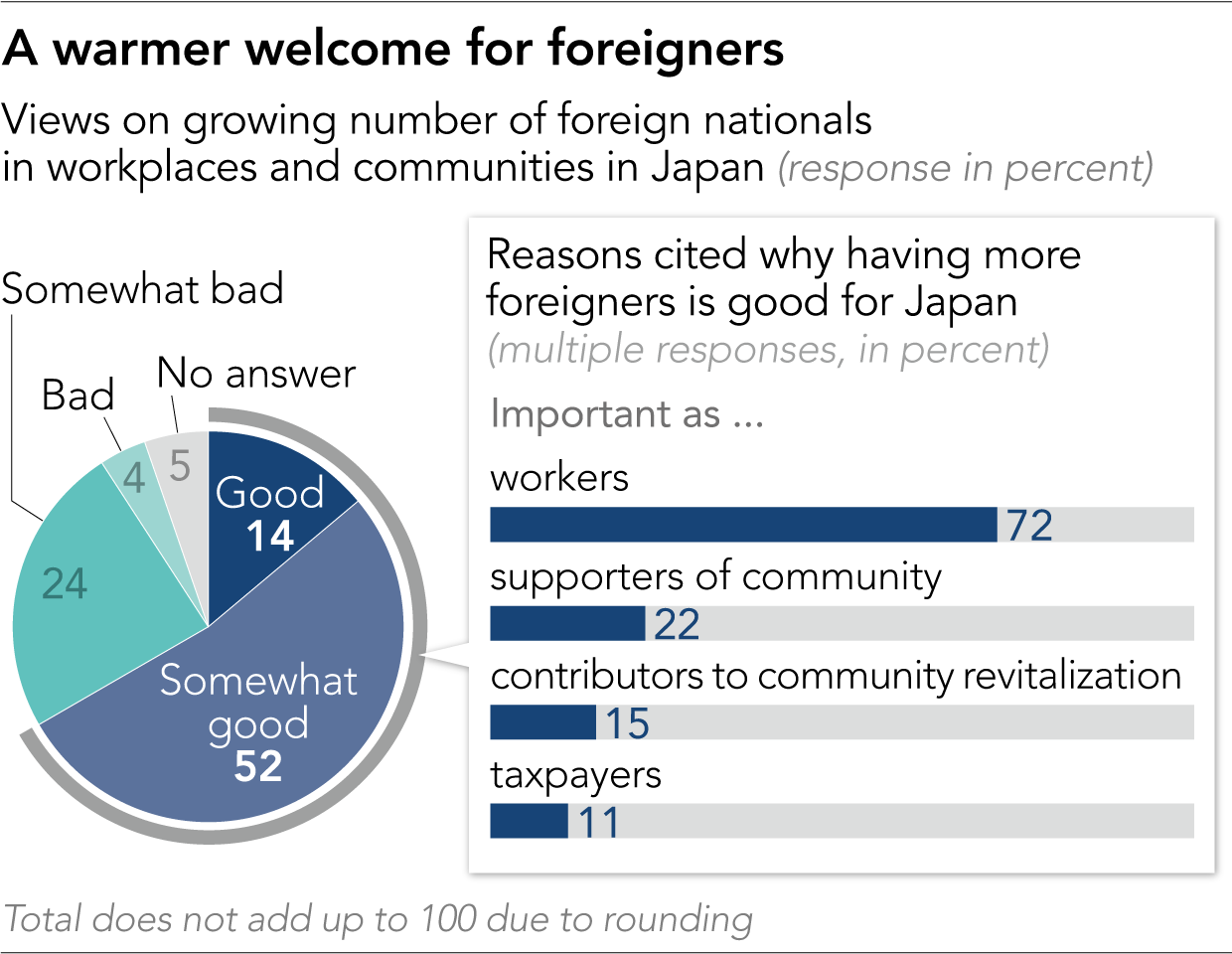 TOKYO — A recent Nikkei survey found that 74% of respondents reported an increase in the number of foreigners in their workplaces and neighborhoods. While the growth of Japan’s foreign population has been a topic of public discussion for some time, most people view the development as positive, with 66% seeing it as a good or somewhat good thing, while fewer than three in 10 see it as bad.

The findings reflect hopes that foreigners will make up for labor shortages and lend social support as Japan’s population dwindles and ages. At the end of June 2018, there were some 2.64 million foreign residents in Japan, equal to 2% of the total population, according to the Justice Ministry, and the number is rising.

Those who regard the rise in the foreign population as good outnumbered those who see it as negative in all age brackets. Younger people, in particular, are open to the idea of having more foreigners in Japan, with 80% of 18- to 29-year-olds welcoming the development. Positive views of Japan’s growing multiculturalism declined with the age of the respondent: 71% among people in their 40s saw the rise in foreigners as positive, while just over half (52%) of those in their 70s said the same.

Among other findings, people with higher incomes tend to view the increase in foreigners more favorably than those with lower incomes. While 61% of people with an annual income of less than 3 million yen ($27,300) welcomed the change, the share was 76% among those who earn at least 8 million yen per year.

Asked to give reasons why they see foreign residents positively, 72% cited their importance as workers, while 22% said they play important roles in local communities. Respondents could give more than one answer.

Among those who see the increase in Japan’s foreign population negatively, concerns about cultural differences and a general sense of wariness were the main reasons given. Fears of a deterioration of public safety was mentioned by 57% of such respondents, while 51% said that foreigners do not follow the rules of daily life, such as properly disposing of garbage. In addition, 50% said they found the behavior of foreigners puzzling.

Overall, there seems more resignation than warm acceptance of the increase in foreign workers in Japan. While 27% of all respondents said such workers should be strongly welcomed, the largest share, 55%, said the increase was undesirable but unavoidable.

Nikkei Research conducted the survey between October and November last year, mailing a questionnaire to people 18 and older from across Japan. It received valid replies from 1,673 people or 55.8% of the total.