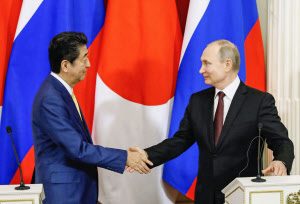 All national dailies reported extensively from Moscow on a summit held between Prime Minister Abe and Russian President Putin on Tuesday, noting that the two leaders agreed in their three-hour meeting to expedite bilateral dialogue for concluding a peace treaty. During their 22nd meeting under the second Abe administration, the two officials also affirmed their commitment to boosting bilateral trade by 50% to about $300 billion per annum in the next several years as part of mutual efforts to strengthen relations. They also agreed to implement “joint economic activities” on the Northern Territories at an early date. Abe and Putin reportedly instructed their foreign ministers, who sat in on the session, to achieve progress on peace treaty negotiations by the time the two diplomats meet in Germany in February on the sidelines of an international security conference. Abe reportedly told the press afterward: “We affirmed mutual determination to actively promote joint efforts to find a mutually acceptable solution under my and President Putin’s leadership.” The Russian leader was quoted as saying: “We confirmed that the two countries are interested in signing a peace treaty.” According to Sankei, Putin added that he believes that the territorial dispute can be resolved. The two officials reportedly did not disclose the details of their conversation on the territorial dispute.

Several national dailies reported that although Abe tried to achieve a breakthrough in the territorial dispute by leveraging his close bonds with Putin, it appears as though no tangible progress was made. Asahi asserted that the premier’s goal of reaching a rough accord on a peace treaty by June on the margins of the G20 Osaka summit is growing elusive. Yomiuri claimed that Abe may consider visiting Russia again in the spring to achieve a breakthrough by using economic support as an incentive to draw Russian concessions. The dailies said the Russian side has little interest in promoting the territorial talks in view of growing opposition among the Russian people to Japan’s demand for the return of the contested islets.

Sankei wrote that Abe is keen to seal a peace treaty with Russia in the belief that stronger security and economic ties with Moscow will be indispensable to protect Japan’s national interests. According to the daily, the premier is anxious to prevent Russia from engaging in a “political honeymoon” with China based on the judgment that although Japan’s security still largely depends on the U.S.-Japan alliance, Tokyo may not be able to counter a stronger Beijing-Moscow partnership amid the relative decline in the U.S. presence in global security and economy. As China appears to be determined to aggressively pursue maritime interests in the East China Sea and beyond, Abe reportedly believes that it is important for Japan to conclude a peace treaty with Moscow so as to reduce the security threat from the north.