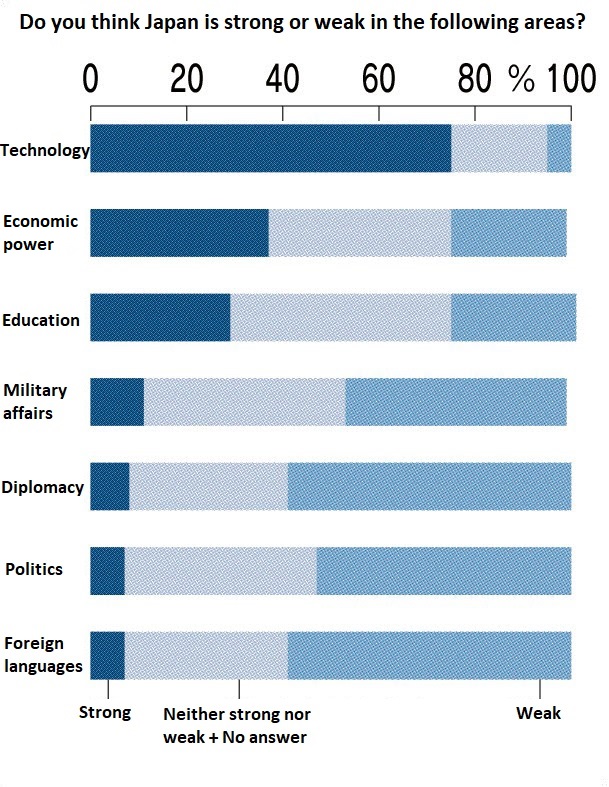 A recent Nikkei survey probed views on Japan’s strengths and weaknesses. Given seven fields and asked whether Japan is weak or strong in each, some 75% of respondents said Japan is strong in “technology.” Next were “economic power” (37%) and “education” (29%). Some 59% said Japan is weak in “diplomacy,” the same percentage that said the nation is weak in “foreign languages.” Some 53% said “politics,” and 46% said “military affairs.”

Over 70% of each age group except for those age 80 or over said that Japan is strong in technology, with 83% of those in their 50s giving that response. This suggests that people have a strong sense of Japan as a technology-driven nation.

In the 40s-and-over age groups – namely, those who remember the bubble economy of the 1980s – those saying that Japan is strong in terms of economic power outnumbered those who said the nation is weak in this area. In the 18–39 age group, many said the nation is weak in terms of economic power. This shows that the young generations, who have experienced recession and low growth, do not have confidence in Japan’s economic strength.

[Nikkei Research conducted the survey between October and November last year, mailing a questionnaire to people 18 and older from across Japan. It received valid replies from 1,673 people or 55.8% of the total.]