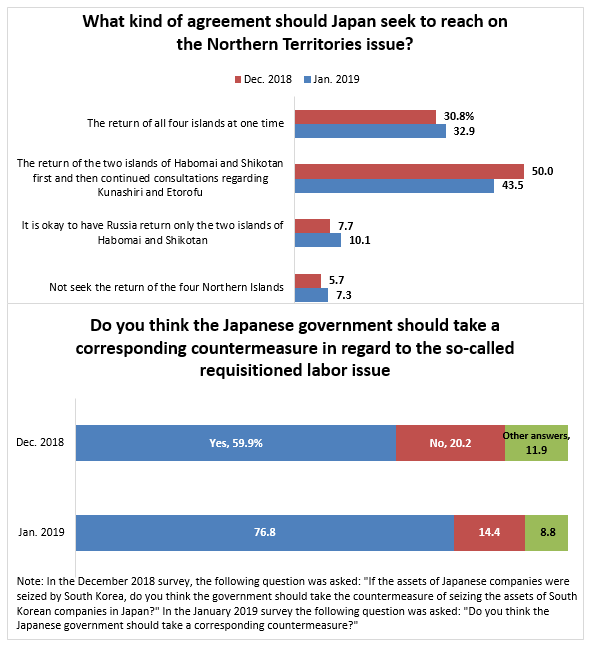 In the nationwide public opinion poll conducted jointly by the Sankei Shimbun and Fuji News Network (FNN) on Jan. 19–20, respondents were pessimistic about the resolution of the Northern Territories issue, which is the largest outstanding issue in the Japan-Russia negotiations to conclude a peace treaty. In the opinion poll taken on Dec. 8–9 last year, some 65.0% said that they were “hopeful” that progress would be made in the negotiations under the new framework led by Japanese Foreign Minister Taro Kono and his Russian counterpart, Sergey Lavrov. [In the January poll, however, only 20.4% said that they think progress will be made.] This reveals a marked change in expectations.

At a press conference on Jan. 21, Chief Cabinet Secretary Yoshihide Suga said, “Japan will continue to persistently engage in negotiations under the basic policy of resolving the Northern Territories issue and concluding a peace treaty.” The fact that no clear policy for resolving the territorial issue was given is thought to be a factor behind the striking number of pessimistic responses in the recent opinion poll.

Asked what kind of agreement Japan should seek on the return of the Northern Territories, a total of more than 76% said either “the return of all four islands at one time” or “the return of the two islands of Habomai and Shikotan first and then continued consultations regarding Kunashiri and Etorofu,” the position referred to as the “advance return of two islands.” Only about 10% of respondents said “it is okay to have Russia return only the two islands of Habomai and Shikotan.” This means that an overwhelming majority of the public still want to see the four islands returned. Prime Minister Shinzo Abe has told those close to him that “Russia is the one that actually holds the islands. If Moscow were to return any of them, it would be hard to get even two of them (Habomai and Shikotan). It will be impossible for all four to be returned at one time unless we win the islands in battle.” This suggests that there is a difference in the perception of reality between the public and the Prime Minister.

The findings of the Sankei-FNN poll suggest that the public has become more critical of South Korea with the so-called requisitioned workers lawsuits and a South Korean Navy destroyer’s illumination of its fire-control radar on a Japan Self-Defense Forces plane.

In the December 2018 poll, which was taken before South Korea’s seizure of the assets of Nippon Steel & Sumitomo Metal, which lost its requisitioned laborers case, some 59.9% of respondents said that “the government should take the countermeasure of seizing the assets of South Korean companies in Japan.” In the recent poll, 76.8% of respondents said “the Japanese government should take a corresponding countermeasure.”

Although the questions differ slightly, the results show that more people are calling for the government to take a countermeasure.

Moreover, the overwhelming majority of respondents support the Japanese government’s position on and handling of the illumination incident, and over 90% of respondents say they are “unconvinced” by the claims of the South Korean side.

In terms of the requisitioned labor issue, the South Korean government has not tried in any way to rectify its Supreme Court’s rulings’ violation of the 1965 Agreement on the Settlement of Problems Concerning Property & Claims and on Economic Cooperation. Moreover, South Korean President Moon Jae-in made a statement at his first press conference of the year that seemed to shift the responsibility to the Japanese side, when he said, “The politicization of this issue by Japanese politicians and political leaders is not a wise stance to take.” The poll findings are thought to have been influenced by South Korea’s inaction and Moon’s statement.

In the illumination incident as well, the South Korean side has not recognized the facts and continues to indicate the fault lies with Japan. These South Korean claims, however, have had almost no persuasive power with the Japanese public, it seems.