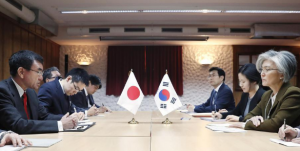 All national dailies reported on bilateral talks held between Foreign Minister Kono and his South Korean counterpart Kang Kyung-wha in Davos on Wednesday. The papers noted that this was the first face-to-face meeting between the two ministers since bilateral relations between Japan and South Korea chilled over the issues of the South Korean court order to a Japanese firm to pay compensation to requisitioned workers and the alleged fire-control radar incident. The papers wrote that although Kono and Kang confirmed the need to closely communicate with each other to develop bilateral relations, there is still a gap between them because the ROK official reiterated Seoul’s fresh allegation that an MSDF vessel deliberately flew at a low altitude near South Korean naval vessels multiple times in recent days. Nikkei wrote that there is no sign of them being able to mend their ties. However, the papers added that the two foreign ministers confirmed their nations’ bilateral and trilateral cooperation with the United States in view of the possibility of a second U.S.-DPRK summit being held in February or later.