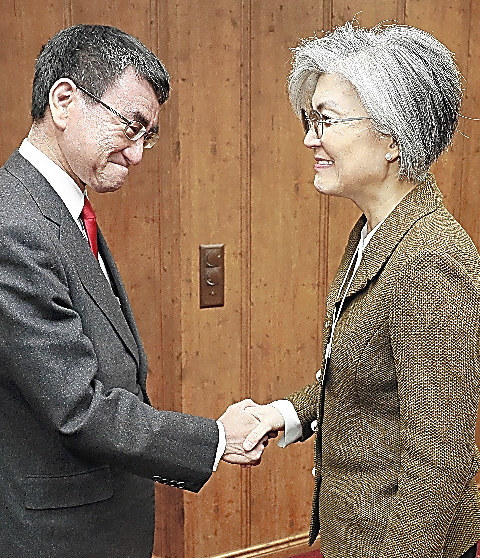 Foreign Minister Taro Kono and South Korean Foreign Minister Kang Kyung-wha held talks in Davos, Switzerland, on the morning of Jan. 23 (evening of Jan. 23 Japan time). In relation to the South Korean claim that Japanese Maritime Self-Defense Force (MSDF) patrol planes have engaged in low-altitude flight, Kang expressed at the beginning of the meeting her concern and regret regarding the incidents. Kono denied that Japanese planes have engaged in low-altitude flight and expressed his regret regarding the South Korean side’s announcement.

This is the first time for the two foreign ministers to meet face-to-face since September last year. The meeting lasted one hour and five minutes. It was their first meeting since bilateral ties deteriorated over the compensation lawsuits lodged by former requisitioned workers against Japanese companies and the illumination of an MSDF patrol plane by a fire-control radar [of a South Korean destroyer].

According to the Ministry of Foreign Affairs (MOFA), the two parties confirmed they will remain in close communication. Issues are arising one after the other that exacerbate the situation, however, and the situation has descended to a state where their response measures cannot keep up.

Kang said: “[Japanese] patrol planes have engaged in low-altitude flight near a South Korean destroyer three times from Jan. 18 until today. The situation has not been resolved. This is of great concern and is regrettable.” “Precisely because it is a difficult time,” she continued, “we will develop our bilateral ties in a sustainable fashion through self-restraint and problem management.”

Kono said that the view announced by the Ministry of Defense on Jan. 21 is [Japan’s] final view. In relation to South Korea’s Jan. 23 announcement that MSDF patrol planes have engaged in low-altitude flight, he denied that the planes were flying at a close distance [to South Korean vessels]. He said that the announcement was regrettable and asked for a cool-headed and appropriate handling of the matter.

At the beginning of the meeting, Kono said, “Japan-South Korea ties are in a very difficult situation. The fact that we are meeting together is significant.” He said, “I would like to confirm that we will fully cooperate in relation to the North Korea issue, too.”

Regarding the lawsuits lodged by requisitioned laborers and others, the Japanese government requested on Jan. 9 that the South Korean government engage in consultations based on the Agreement on the Settlement of Problems Concerning Property & Claims and asked for them to reply within 30 days. The South Korean government has said it will “thoroughly consider the request.” According to MOFA, Kono urged that the issue be resolved at an early date through consultations and the two parties repeated their basic positions at the Jan. 23 foreign ministers meeting.