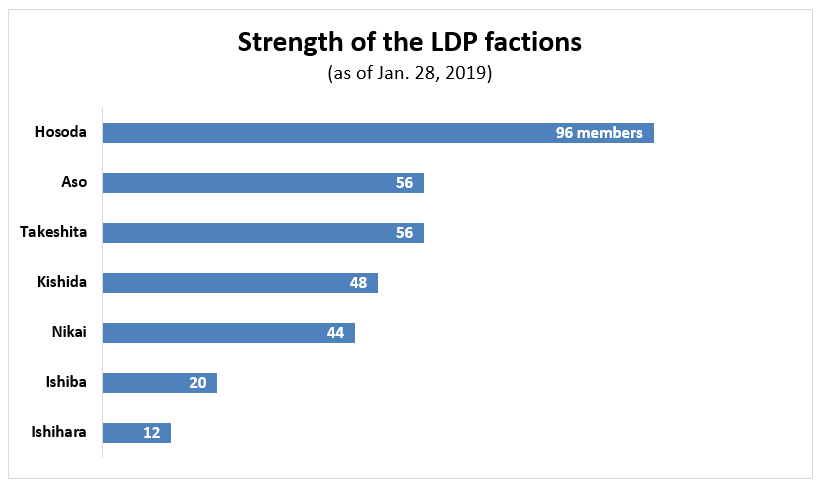 The Aso and Takeshita factions are now tied as the second-largest faction in the Liberal Democratic Party (LDP) with 56 members each. The Aso faction’s membership decreased when one member died and another lost his membership qualifications. Meanwhile, the Takeshita faction admitted a new member last autumn.

The membership of the Aso faction has fallen to 56 because Lower House member Sei Omi (Tokai proportional representation bloc) is running in Aichi Prefecture’s Anjo City mayoral election (official campaigning started on Jan. 27) and thereby is automatically disqualified for faction membership. It looks like Shuhei Aoyama, who is set to move up to take the place of Omi in the Tokai proportional representation bloc, will join the Hosoda faction, the LDP’s largest.

In July 2017, the Aso faction became the second-largest when it boosted its membership to 59 through its merger with the Santo faction and most members of a group spearheaded by former Minister for Internal Affairs and Communications Tsutomu Sato who left the Tanigaki group. Aso faction membership declined to 57 in December last year, however, when former Disaster Management Minister Yoshitada Konoike (Upper House, Hyogo) and former State Minister of the Environment Tomokatsu Kitagawa (Lower House, Osaka district 12) each died.

The Takeshita faction numbered 55 through last autumn. With the death of Hiroyuki Sonoda (Kyushu proportional representation bloc), who had no faction affiliation, Masahisa Miyazaki was moved up to take the place of Sonoda in November last year, adding one to the Takeshita faction’s membership.