Arashi’s hiatus spurs heartbreak, but hopes for a 2020 Olympic farewell 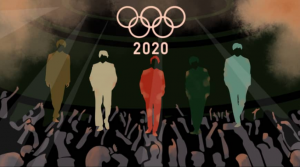 Eternal flame: Will going on hiatus book Arashi its place in the 2020 Tokyo Olympics opening ceremony? | ILLUSTRATION BY RIKO MONMA

The 2020 Tokyo Olympics creep ever closer and one of the biggest arguments that remains is which musical performers will feature in the event’s opening ceremony. Up until now, debate over who should represent Japan on the international stage has been raging.

But long-running pop group Arashi might have just moved into the lead — albeit by plunging its fans into despair.

Late on Sunday, the group posted a video to its official fanclub website announcing its intention to go on hiatus at the end of 2020.

“Around the middle of June 2017, I told other members that I wanted to end the activities as Arashi for now and that I wanted to live freely,” leader Satoshi Ono said at a press conference held the next day in Tokyo. The group’s talent agency, Johnny & Associates, confirmed the hiatus as well.

While the five members stressed this would be a “break,” fans and general observers reacted like an era was coming to a close (a pop outfit deciding to take some time off two years from now doesn’t usually warrant breaking news alerts). But while Arashi isn’t officially disbanding come 2021, its announcement does signal the end of something, in that no Japanese group in the digital age is going to be so prevalent and inescapable ever again.

Numbers alone make a case for all this hoopla. Since debuting in 1999, Arashi has been a staple at the top of the Oricon charts. It wasn’t always smooth sailing, with a period early on in which sales slumped — though even then, this wasn’t anywhere near the “rock bottom” narrative worthy of a biopic. The last time any Arashi release, full-length or single, failed to debut at No. 1 was in 2003.

But Arashi isn’t an entity known just for its music, and its members didn’t become Japanese superstars through songs alone. For decades, performers in the country have dabbled in all sorts of aspects of the entertainment industry, an approach taken to another level by Arashi’s predecessors SMAP, who appeared on screen in addition to being J-pop sensations.

Arashi’s members streamlined the strategy for Japan in the 2000s — they were music performers, movie stars, television staples and commercial spokespeople. They hosted multiple programs of their own — from low-stakes game shows to low-stakes variety shows — while also becoming the faces of offerings like “24-Hour Television” and NHK’s year-end “Kohaku Uta Gassen.” Then factor in magazine appearances and other published works — at least when Johnny’s had allowed their faces to be seen. Arashi is less a pop group and more an all-encompassing brand.

It’s possible that no entertainers will ever be as ubiquitous in Japan again. Arashi was everywhere in the 2000s — except, officially, on the internet. Johnny’s shielded its acts from the scary digital world, but in the first decade of the 21st century that wasn’t a problem. Japanese entertainment still flowed through traditional platforms of power. The web was some weird alternate zone with significantly less impact than TV and the print industry. Arashi shone in these lanes, and was practically always there. Thank Johnny’s for that one — it used its massive influence over all media to make sure the group got premier placement (and all scandals be kept at bay). This resulted in seemingly everyone knowing who Arashi was — a popular eulogy on social media for the group following the hiatus news goes along the lines of “grandmas and kindergartners alike knew who they were.” And that’s true, because Arashi couldn’t be unknown.

But the environment had changed by the end of the decade. The internet became more central to daily life and media in Japan fragmented. In 2019, it’s more like a thousand shards spread out on the kitchen floor — you have CD sales, downloads, streaming, YouTube, TikTok and a mess of other platforms offering no clear picture of a dominant force in music or entertainment. Songs and artists can still become monoculture — Da Pump’s “U.S.A.” or AKB48’s “Koisuru Fortune Cookie” — but no single entity can ever tower over all media like Arashi did. Even Johnny’s, which muscled its acts into the spotlight for decades, can see which way culture is heading.

Which, ironically, might have actually helped the group’s global ambitions. The 1990s saw artists such as Namie Amuro and SMAP hint at global potential for J-pop, and Arashi seemed to have been created to capitalize on that. When Johnny’s introduced the group in 1999 during a press conference on a cruise ship off the Hawaiian coast, agency head Johnny Kitagawa said the quintet was named Arashi, the Japanese word for “storm,” because it hoped to create a storm throughout the world. And to some degree, it did. Arashi developed a strong following throughout Asia, South Korea included. It also served as a gateway to many’s interest in J-pop as a whole, judging by the number of Arashi-centric LiveJournals and message boards there are.

But Arashi never made any major international breakthroughs, unless serving as the face of the then-fledgling (now fumbling) Cool Japan initiative counts. There are plenty of reasons for that — Arashi’s brand of pop was out of step with global music trends in the 2010s, for one — but none bigger than the group’s reluctance to get online, because Arashi actually functions as a perfect group for the social media age. In her paper “Johnny’s Idols as Icons: Female Desires to Fantasize and Consume Male Idol Images,” Kazumi Nagaike argues that Arashi’s (and other Johnny’s boy bands) “absence of self-consciousness and principles” connected with fans who could then create their own narratives and images of them.

This point perfectly describes music fandom today, where pop stars are canvases for a fan’s own politics (and plenty of memes). But people need an easy way to find stars, and that’s the web. There will never be another Arashi because a pop group — or, indeed, any entertainer, even in Japan — can’t ignore the internet in favor of old-school platforms.

So these last two years before the group’s break will offer a final glance at a music model on the verge of extinction, one perfected by Arashi and impossible to re-create now.

It also gives that era a proper chance to say goodbye. The dissolution of SMAP a few years back was sudden and fueled by scandal — many fans still haven’t accepted it. Arashi boasts none of the same drama. It gives fans plenty of time to accept and celebrate the group, while also offering Arashi, Johnny’s and the old ways of Japanese entertainment a chance to properly exit, even if just for a short while.

And it feels safe to speculate that Arashi will play a part at the 2020 Olympics, whether in the official ceremonies or just as part of the bonanza around the event. It would be fitting for Japan in the 21st century, actually: A group that has become known as “Japan’s boy band,” which has starred in textbooks meant to show students how great the country can be, taking the spotlight one last time to the delight of its compatriots, while the rest of the world meets Arashi for the first time.