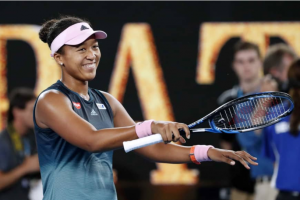 Naomi Osaka’s Australian Open victory on Saturday has already been a boon to some of her sponsors as they capitalize on the newly crowned world No. 1’s rising fame.

Models of the Adidas AG tank top, wristband, skort and sun visor worn by Osaka during the tournament have been flying off the shelves at a Windsor Racket store in Shibuya Ward, Tokyo, said Masahito Yamazaki, head of the planning division at Windsor Corp.

“Her tennis apparel appeared on the storefront around her second or third match and it sold out,” Yamazaki said. “As she made to the next round, more customers contacted us about them, so we had more shipped in. By Sunday noon, everything was sold out.”

An Adidas spokesman said the tennis apparel Osaka uses has run out of stock at its online store. He declined to reveal the number of orders it had processed.

Osaka’s monumental win over the Czech Republic’s Petra Kvitova in Melbourne has moved her to the top of the Women’s Tennis Association’s singles rankings, a first for an Asian player.

During the match, Osaka wore a Citizen Watch Co. piece with a showy orange strap. The Eco-Drive Bluetooth model, of which only 1,000 are due to be made, is slated to go on sale March 7. Advance orders have already sold out, company spokeswoman Norie Odate said.

“Initially, advanced orders were slow,” Odate said. “But after she won the championship, it went up significantly.”

She added that some may be available for purchase on the release date.

A spokeswoman for Yonex Co., which makes Osaka’s rackets, said by phone the company has been receiving more business inquiries and additional orders.

She said it is not yet known how Osaka’s latest grand slam victory will impact sales of rackets that are based on the model she uses, but added that it is likely the 21-year-old’s win may have once again boosted revenue for the Tokyo-based sporting goods maker.

Last September, just a week after Osaka defeated Serena Williams in the U.S. Open final, sales of her racket model spiked around fourfold compared with the weekly average for August. Osaka uses a customized version of the racket, which first went on sale in January 2018.

Now that Osaka is world No. 1, the spokeswoman said Yonex has also seen an increasing number of queries about her racket strings in the belief that a recent change contributed to her success in Australia.

“At the end of the year, (Osaka) started using stiff polyester strings that help bring the ball down hard,” the spokeswoman explained.

Osaka’s victory has also cast a spotlight on another Naomi — a roughly 4-year-old earless female seal that is a resident of Kamo Aquarium in Tsuruoka, Yamagata Prefecture.

“Our Naomi has been enjoying popularity … and I’m hoping (Osaka’s) success will help draw more visitors,” said Ai Ito, 27, a marine animal breeder at the aquarium, which has been decorated with celebratory banners and photographs of Osaka in commemoration of her success.

In response to calls from the public, aquarium employees named the seal after the tennis player following the U.S. Open, “in the hope she grows healthy and cared for, just like Naomi Osaka,” Ito said.

The seal was rescued and came to the aquarium a year earlier. Now, Naomi weighs 495 kg and “is getting bigger,” according to the breeder.