The front line of Japan’s defense (Part 3): “China and us are irreconcilable” 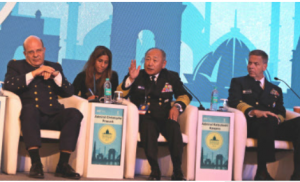 “China is undertaking in the South China Sea actions that ignore international law,” said Joint Staff Chief Katsutoshi Kawano, 64, the highest ranking uniformed officer in the Self-Defense Forces. “The PRC’s values are irreconcilable with ours.” He made the comment on Jan. 9 at the “Raisina Dialogue,” a multilateral symposium held in India, warning about China’s maritime expansion to military representatives from the U.S., Australia, France and India. They spent most of an hour-long discussion on the China issue.

On Aug. 26 in 2018, “Kaga,” the largest destroyer in the Maritime Self-Defense Force (MSDF), left Kure base in Hiroshima Prefecture on a two-month cruise. The destroyer sailed from the South China Sea to the Indian Ocean, visiting five countries including Indonesia and Sri Lanka to conduct joint exercises with each country’s military. Dubbed ISEAD18, it was the first deployment of a Japanese warship to the Indo-Pacific for training.

“We will achieve an open ocean under the rule of law,” MSDF Rear Adm. Tatsuya Fukuda, 51, the deployment commander asserted at each destination. A crew member told the press at one destination, “It’s a lot different now than it was during the Gulf War.”

Defense Minister Takeshi Iwaya, 61, visited Brest in western France on Jan. 11 for a meeting with his counterpart Florence Parly, 55. During the meeting, the Japanese defense minister said, “Both Japan and France are Indo-Pacific nations.” The French defense minister replied, “France will be involved in ensuring the peace and stability of the Indo-Pacific region.”

France deploys forces in the Pacific including New Caledonia. “European countries’ wariness of China is now  very different from several years ago,” said a Defense Ministry official. Diplomatic relations between Japan and China are improving, but the official pointed out that “from a medium- to long-term perspective, China’s military expansion remains a significant concern.”

North Korea’s nuclear and missile development remains unchanged, posing a threat to Japan’s security. However, the security environment has become more serious because the trilateral containment built by Japan, the U.S. and the ROK is now weakening on account of the issue of the South Korean destroyer’s illumination of an MSDF plane with its fire-control radar.

“We’ve run out of patience,” said National Defense Division Director Tomohiro Yamamoto, 43, of the Liberal Democratic Party at a meeting held on Jan. 22. Other attendees said one after another something to the effect that “we should discontinue defense exchanges with the ROK.” On Feb. 5, the Defense Ministry notified South Korea of its cancellation of the destroyer Izumo’s call at Busan port slated for this spring.

Japan’s international security cooperation is extending to the Indo-Pacific region and Europe but its relationship with its neighbor is becoming unstable.