Stories from my life (Part 3): My struggle with English led to wonderful world 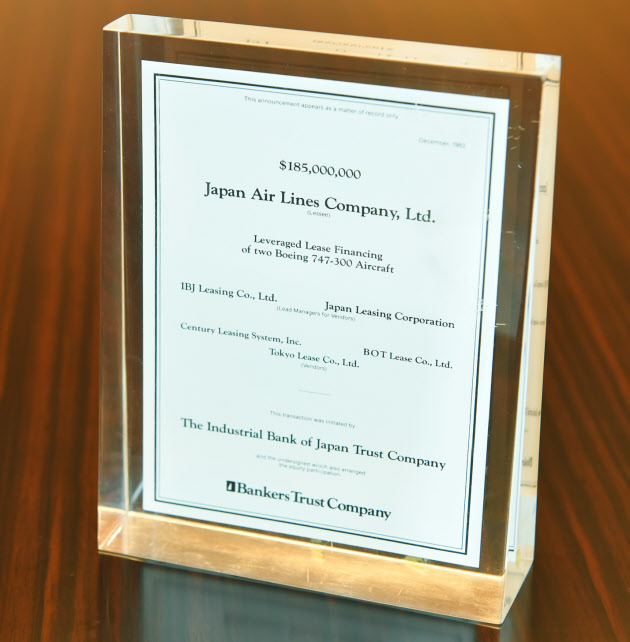 Tombstone for my first project. The project was the first step in my journey of building connections overseas.

It was my eighth year with the bank. The letter officially informing me of my transfer to New York came completely out of the blue. English had been my weak subject in school. English was a tough battle for me in my university entrance exams as well.

In those days, the bank was pressed to respond to globalization, and it had no choice but to dispatch overseas even people who were not good at English.

Usually such employees were either placed in desk jobs in accounting or general affairs or put in charge of Japanese-affiliated businesses. For some reason, though, I was put in charge of U.S.-affiliated companies and, moreover, was assigned to the section that handled “asset finance,” which is very complicated.

Mr. Y, my direct supervisor, was a truly internationally minded person; he had studied abroad three times since high school. It was common for us to have meetings that went on and on every day with business partners, and the meetings were all in English.

They engaged in a verbal volley before my very eyes, but I didn’t understand a thing. I was the only one who was ignored. I felt like an invisible person who was as good as absent.

The turning point came suddenly three months after my arrival at the post. Mr. Y was plucked away by a U.S.-affiliated financial institution.

There were many important projects that were partway through to completion. Attorneys, accountants, financial institution executives, and investors involved in the projects were all looking at me as the person now suddenly in charge. “Things will not move forward if I can’t get them to understand the project and make a decision.”

From that day on, the meetings became for me a high-level English-language school. They had to somehow understand my English(-like language) and have themselves understood by me. The meetings, which used to feel like racing down the highway, were now like going down a farm road with tractors.

Three months later, my field of vision suddenly opened up. I understood what they said and I could communicate what I wanted to say. What lay before me after surmounting the wall was a really wide and wonderful world.

The photo is of a tombstone of my first project, an aircraft financing project worth $180 million.

I accomplished the deal thanks to the cooperation of many, and through it, I was able to take the first step on my journey of building valuable connections overseas. Without the joys and trials of that time, my life as a banker would have been entirely different.

“When you hit a wall, turn your thoughts to what lies on the other side.” That is the lesson that was inscribed in my heart through my struggle with English.