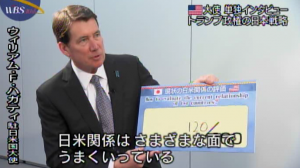 TV Tokyo aired an exclusive interview with Ambassador Hagerty during its “World Business Satellite” program on Thursday evening. The interviewers first asked the Ambassador to rate the present state of the U.S.-Japan relationship. He gave a score of 120 on a scale of 100, saying the relationship is working well “on so many dimensions.” Citing the upcoming U.S.-DPRK summit as an example, the Ambassador stated that this would not be possible without the “strong partnership with Japan” because it is the result of the U.S. and Japan persevering in applying pressure.

On the upcoming trade talks between the two countries, the Ambassador said the U.S. has specified that they will be “primarily on goods and services, and also trade and investments.” Asked to comment on the difference between the Trade Agreement on Goods (TAG), the term favored by Japan, and a free trade agreement (FTA), which the U.S. favors, he pointed out that neither country used either of these terms when they agreed to negotiate a bilateral trade agreement. TV Tokyo reported that the Ambassador indicated that regardless of the nomenclature, the trade talks need to move forward speedily. Pointing out that the U.S. is the most open economy in the world, the Ambassador was shown saying: “What we are looking for is reciprocity, that is, a similar type of access to the Japanese market.”