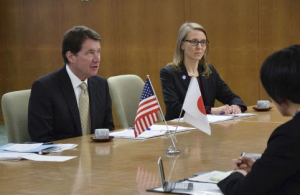 Yomiuri wrote in its Hokkaido edition that Ambassador Hagerty held a meeting with Hokkaido Governor Takahashi on Thursday after visiting the Sapporo Snow Festival. Regarding his impression of the snow festival, the Ambassador was quoted as saying he felt the energy of Hokkaido and got the impression that the region has recovered from the damage it suffered in the major earthquake that hit the area last September The paper wrote that referring to North Korean ballistic missiles’ flying over Hokkaido in 2017, the Ambassador told reporters after the meeting that the United States will continue to apply maximum pressure on Pyongyang and that he expects that progress will be made at the second U.S.-DPRK summit to be held later this month. The regional Hokkaido Shimbun ran a similar report.