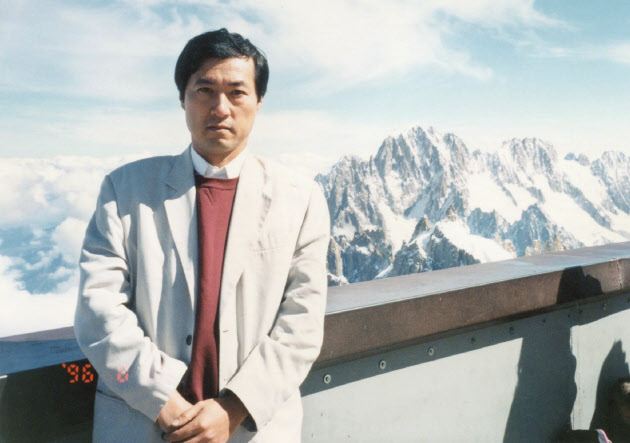 In Switzerland when I was the IBJ President’s secretary (1996)

I participated in the World Economic Forum (often referred to as the Davos Conference) for the first time in 1994 when I was secretary to Industrial Bank of Japan (IBJ) President Yo Kurosawa.

President Kurosawa, who had connections with many bankers around the world, attended the meeting every year without fail. He went from session to session, each on a different theme.

“Mr. Chairman!” he would say, asking for the right to speak. Then he would walk up onto the stage and offer his views.

As his flunky, I accompanied him in the meeting room. In this way, he gave me the opportunity to witness high-level discussions. At that time, though, I did not understand this kindness at all.

Located in eastern Switzerland, Davos is one of the world’s finest ski resorts. It felt wrong to leave the town without skiing, so I secretly asked around.

The opportunity came. There was a meeting for top executives only. Deciding that now was the time, I ran to a rental ski shop and headed for the slopes. Before my very eyes lay snow of sublime quality.

I completely lost myself in the skiing. I literally “forgot time.” It was well past the time that President Kurosawa’s meeting ended when I came to my senses. I raced back to the meeting room, but it was too late. Mr. Kurosawa was standing there all alone with a disappointed look on his face.

Even today when I go to Davos, I break out in a nervous sweat as I remember that day.

After becoming president of Mizuho, I attended the Davos Conference for four straight years. Today the conference is much more widely known and larger in scale, and business people are not the only ones to attend. VIPs and experts, including politicians, scholars, and cultural leaders, gather from around the world.

I always find the discussions in other fields very stimulating. The chance to exchange views in person with corporate executives from both Western and Asian countries is very meaningful from the perspective of business as well.

I participated in two very timely panel discussions in 2017 and 2018. The topic in 2017 was “challenges accompanying the dawn of a 100-year lifespan” and in 2018 it was “basic income as a prescription for rectifying inequalities.”

Now I can understand what President Kurosawa wanted to communicate to me: Japan also needs truly internationally minded people who can express their opinions and engage in debate at international conferences.

Today a quarter of a century later, my memories of Davos and my failure to understand the treasure being given to me have become inextricably interwoven. This year’s Davos conference will open soon.