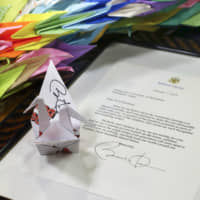 HIROSHIMA – Students at the Prefectural University of Hiroshima on Friday said that they have received a paper crane from former U.S. President Barack Obama to complete their senbazuru (1,000 origami cranes) wishing for a peaceful future.

Earlier this month, students who are part of the school’s Obama Project visited Washington and met with a staff member of the Obama Foundation in order to hand over a piece of origami paper and a letter asking Obama to visit Hiroshima again. Paper cranes are viewed as a symbol of peace in Hiroshima. The following day they received a paper crane with Obama’s signature and a letter that said: “I am pleased to share the one-thousandth crane with you — a symbol of the limitless potential in each of you and each one of the students who wrote me such thoughtful and inspiring letters.”

“Michelle (Obama) and I believe in you, we are rooting for you, and we are counting on you to pick up the baton, continue talking about the tough issues your generation will soon need to get to work on solving, and help lead our world toward our brighter, more beautiful shared future.”

Hiromasa Hara, 21, a fourth-generation hibakusha who leads the project, said: “We are happy that Mr. Obama, who always sends powerful messages, has taken an interest in our project. We hope this will offer an opportunity for the rest of the world to learn about Hiroshima.”

The 999 paper cranes were made by students in Hiroshima, ranging in age from elementary school pupils to university students. The university will consider how best to preserve the paper cranes and the letter from Obama.

Obama visited Hiroshima in May 2016 as the first sitting U.S. president to visit the city, which was hit by an atomic bomb in 1945. He called for the elimination of nuclear weapons in a speech delivered at Hiroshima Peace Memorial Park, met with three survivors of the bombing and offered four paper cranes.