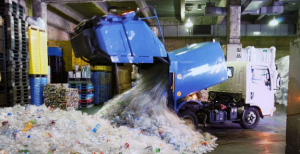 File photo taken April 10, 2017, shows plastic bottles piled up at a collection facility in Tokyo. Japan’s exports of plastic waste in 2018 decreased by 30 percent from the previous year following China’s crackdown on waste imports, according to analysis by the Japanese research foundation Institute for Global Environmental Strategies. (Kyodo)

Japan exported about 1.01 million tons of plastic waste in 2018, down from 1.43 million tons the previous year, according to the Institute for Global Environmental Strategies, with shipments to China plunging to 100,000 tons last year from 1.02 million tons.

Japan’s plastic waste shipments to Southeast Asian nations such as Thailand, Malaysia and Vietnam increased in 2018 after China imposed restrictions.

But Japan’s shipments to Southeast Asia are unlikely to grow further as some countries in the region have also started to impose restrictions.

Yoshinori Morita, a visiting researcher at IGES, said the Japanese government should oblige manufacturers of plastic products to use recycled materials in Japan.

“Japan needs to take the initiative in creating common rules throughout the Asian region so that plastic waste can be recycled properly,” said Morita.

Hideshige Takada, a professor at Tokyo University of Agriculture and Technology, said companies should use alternative materials for food containers and other products.