On Feb. 16–17, Kyodo News conducted a telephone-based public opinion poll of Okinawan voters on the prefectural referendum on the relocation of the U.S. military’s Futenma Air Station (Ginowan City, Okinawa Prefecture) to the Henoko district of Nago City. Some 67.6% of those who said that they will go vote in the referendum said that they are “opposed” while 15.8% said they are “in favor” and 13.1% said they are “neither in favor nor opposed.” Of all the respondents, 86.3% said the central government should respect the referendum outcome.

Including those who have already voted by casting a pre-voting day ballot or an absentee ballot, a plurality of 94% said that they will vote in the referendum. The turnout rate for the referendum is a focal point as there is a chance that the outcome will change depending on the actual turnout rate. The referendum on the land reclamation work being done as part of the relocation of the U.S. military facility to Henoko will take place on Feb. 24, except in some outlying islands.

Polling methodology: The survey was conducted by telephone on a computer-aided random digit dialing (RDD) basis on Feb. 16–17 targeting voters in Okinawa Prefecture. The survey covered 1,470 randomly selected households with eligible voters [by landline numbers], with responses collected from 1,047 people. 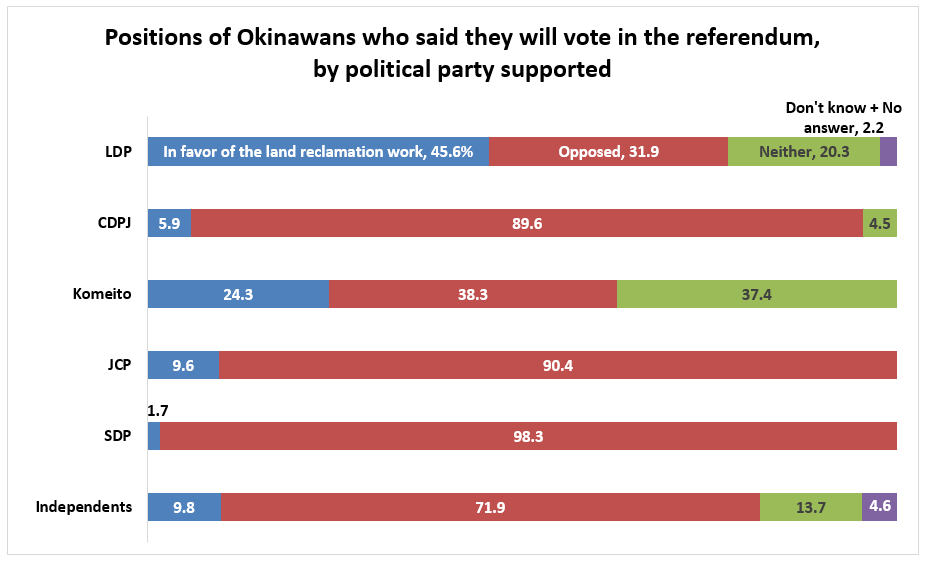