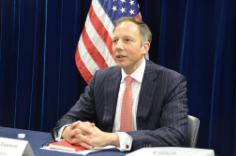 On Feb. 25, Assistant Secretary of State for Energy Resources Francis R. Fannon said China’s loans to developing nations, so-called debt traps, are “problematic” and noted that “the international community shares this concern.” He emphasized that a lending program led by Japan and the U.S. offers advantages as it is designed to ensure aid recipient nations can benefit in the mid- to long term. He answered questions from the press in Tokyo.

China lavishes on recipient nations money for development projects, but once they fail to repay their debts, it seizes ports and other strategic infrastructure. “All countries acknowledge that this approach is not sound,” said Fannon.

Demand for oil and natural gas is rapidly increasing among developing nations in the Indo-Pacific region. Fannon noted that Japan and the U.S. will “give consideration to stable supplies of energy and help them achieve economic growth in the long term” based on free and fair market principles.

He also noted that “we are not trying to create a hostile relationship with China” and indicated that the U.S. plans to call on China to rectify its lending program targeting developing nations.

With regard to Washington’s demand that countries cut their imports of Iranian oil to zero as part of its sanctions against the Middle Eastern nation, Fannon stressed that “U.S. policy remains unchanged.” He indicated that President Donald Trump is expected to make a decision after the exemption period for eight countries and regions, including Japan and Taiwan, expires in May.