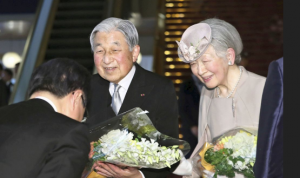 Japanese Emperor Akihito and Empress Michiko leave a ceremony marking 30 years of his reign, at the National Theatre of Japan, in Tokyo, on Feb. 24, 2019. (Pool photo) (Kyodo)

Japan’s House of Representatives on Tuesday issued a congratulatory message to Emperor Akihito on his 30-year reign ahead of his abdication at the end of April, the first of its kind dedicated to a particular imperial anniversary.

“We, the Japanese people, respectfully acknowledge His Majesty the Emperor’s achievements over the past 30 years under his era of Heisei, during which he has always stood by the people and prayed for their peace,” read the message adopted in the lower house plenary session.

Among political parties, the Japanese Communist Party, which has traditionally maintained a distance from the imperial system, boycotted the Diet session, saying the party does not agree with the “unprecedented” message which “excessively praises” the emperor in light of the principle of popular sovereignty.

The Heisei era started with his enthronement in 1989 and will end when the 85-year-old steps down on April 30 as the first Japanese monarch to do so in about 200 years. His eldest son Crown Prince Naruhito, 59, will take over the Chrysanthemum Throne on May 1.

On Sunday, a government-sponsored ceremony marking the 30th anniversary was held in Tokyo, with around 1,100 people, including government officials and foreign ambassadors, attending.

It was the first time the lower chamber had adopted a congratulatory message since December 2001, when Princess Aiko, the granddaughter of the emperor and Empress Michiko was born. Parliamentary messages were also crafted in 1990 for the current emperor’s enthronement accession ceremony and 1993 for the crown prince’s wedding event with Princess Masako.

The House of Councillors, or upper house, is also seeking to release a separate message.