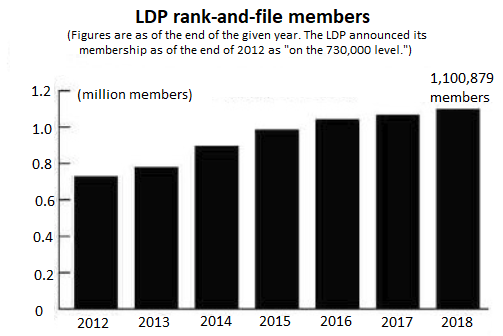 On Feb. 26, the Liberal Democratic Party (LDP) announced that it had 1,100,879 rank-and-file members (total of regional and occupation/interest group members) as of the end of 2018, up by 32,319 from the end of 2017. This marks the sixth consecutive year that the party’s membership has increased.

By region, Tokyo produced the most members at 117,382. The prefecture producing the least was Okinawa at 6,578. At a press conference on Feb. 26, LDP Secretary-General Toshihiro Nikai said: “A major goal for us for the time being is to have 1.2 million members. A party has no future if it is shrinking.”

LDP membership dropped substantially after the party fell from power in 2009. LDP membership declined to the 730,000 level at the end of 2012. Since 2014, the party has promoted a campaign to increase membership to 1.2 million. It gave each LDP Diet member the quota of bringing in “at least 1,000 people” and introduced a framework for levying a fine on those unable to reach the target. As a result, membership recovered to the 1 million level at the end of 2016 and rose to the 1.1 million level two years after that.