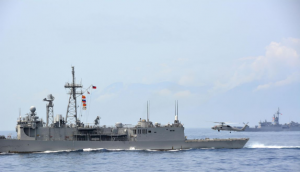 The United States and Japan might come to Taiwan’s rescue if it is attacked by China, if they deem intervention to be in their best interests, Defense Minister Yen De-fa said on Monday.

If Chinese military aggression is seen to undermine regional security or international order, “anything could happen, including the United States and countries sending troops to help defend Taiwan,” Yen told a legislative committee meeting.

“Japan is geographically close to Taiwan, so it’s definitely possible,” he said.

Yen said that despite possessing a first strike capability, Taiwan would not be the first to initiate conflict with the mainland. But if one does, erupt, he added, “We will fight to the last man to protect Taiwan and its people.”

His remarks came after several local politicians commented on China’s military ambitions with regard to Taiwan.

President Tsai Ing-wen told CNN in an interview last week that while Taiwan could withstand the first wave of Chinese strikes by itself, “we hope that the rest of the whole world would stand up together to exert strong pressure against China soon after that.”

Taipei Mayor Ko Wen-je recently came under fire after he questioned whether Taiwan’s military could withstand two days of attack, having abolished conscription.

The Taiwan Relations Act, enacted by the U.S. Congress in 1979 when the United States cut diplomatic ties with Taipei and established them with Beijing, states that it is U.S. policy to consider any effort to determine the future of Taiwan by other than peaceful means as a threat to regional peace and security.

However, it does not specify whether the United States would come to Taiwan’s defense if it were attacked.

Taiwan has been governed separately from the mainland since the two split amid a civil war in 1949. Beijing has since considered Taiwan a renegade province awaiting reunification, by force if necessary.