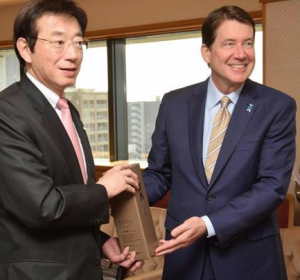 Kobe Shimbun ran a similar report about the Ambassador’s meeting with the Kobe mayor, quoting the Ambassador as saying that the city’s efforts to support startup enterprises in collaboration with the Silicon Valley fund are innovative. The paper wrote that according to the U.S. Consulate General Osaka-Kobe, the Ambassador visited Kawasaki Heavy Industries’ Kobe plant earlier in the day and observed the company’s production of Shinkansen and other train cars there and discussed with Kawasaki President Kanehara economic cooperation between the United States and Japan and the investment climate in the U.S. The local business daily Kobe Keizai News also reported on the Ambassador’s courtesy call on the Kobe mayor.