U.S., DPRK reach no agreement on denuclearization due to gap over sanctions 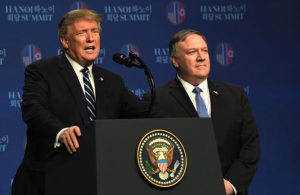 All national dailies gave top play to the second day of summit talks held between President Trump and North Korean leader Kim Jong Un in Hanoi. The papers wrote that the two leaders did not sign a joint statement because they failed to narrow the gap between the United States’ demand for substantive denuclearization measures and Pyongyang’s insistence on the lifting of all sanctions. The papers quoted the President as saying at a news conference in Hanoi on Thursday: “Basically they wanted the sanctions lifted in their entirety. But we couldn’t do that….  We just felt it wasn’t appropriate to sign an agreement today.”

Asahi wrote that although the President expressed his intention to continue dialogue with Kim Jong Un, the future of their talks seems uncertain. The paper said that while the DPRK leader may be hoping not to jeopardize his relationship with President Trump, their talks this time disclosed a gap between the United States and the DPRK over sanctions relief. The paper also speculated that the failure to obtain an agreement from President Trump could deal a heavy blow to Kim Jong Un because President Trump is more conciliatory toward Pyongyang than past U.S. presidents. However, the paper also projected that the security environment in the region probably will not drastically change because Pyongyang is unlikely to raise tensions by conducting missile and nuclear tests.

Yomiuri conjectured that the United States and the DPRK were unable to sign a joint statement because the gap between them was much wider than they had expected. Speculating that working-level preparations for the summit were not sufficient, the paper contended that it was appropriate that no hasty agreement was reached at the summit in the absence of North Korea’s commitment to denuclearize. Mainichi wrote that although attention was focused on whether the gap between the United States’ insistence on the DPRK’s complete denuclearization and Pyongyang’s demand for rewards from Washington would be narrowed, the two nations did not make concessions and the challenges to achieving denuclearization were revealed. Nikkei contended that the wide gap between the two nations cast a shadow over the future of U.S.-DPRK talks on denuclearization.

In a related development, NHK reported this morning that Chinese Foreign Minister Wang Yi met with DPRK Vice Foreign Minister Ri Gil Song in Beijing yesterday. In reaction to the U.S.-DPRK summit’s failure to reach an agreement, Wang reportedly noted that difficulties are inevitable in discussions on deep-rooted issues, but he urged the U.S. and the DPRK to persevere in dialogue in order to resolve problems. NHK conjectured that the DPRK is attempting to strengthen cooperation with China as its backer since the U.S.-DPRK talks have become stalled.