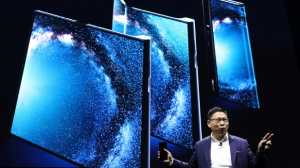 KYOTO — In a bid to secure smartphone components for a summer launch of new models, China’s Huawei Technologies has boosted orders from Japanese suppliers, moving ahead to avoid supply disruptions amid growing U.S. pressure, Nikkei has learned.

Huawei is asking suppliers to increase shipments by early summer, when production of its latest smartphone model goes into full swing. Murata Manufacturing appears to have received double the usual volume of orders and plans to boost shipments accordingly.

With the U.S. taking a tough approach toward Chinese tech companies over security concerns, Huawei appears intent on stockpiling supplies to avoid the kind of component shortages that crippled compatriot telecommunications company ZTE.

Rohm Semiconductor also will increase supplies of integrated circuits and camera-related parts to the Chinese company by around May.

Though Huawei increasingly makes its own semiconductors, it relies on Japanese and American sources for many smartphone parts. Some Japanese companies say Huawei indicated that procuring parts from the U.S. had grown difficult.

Japan’s parts suppliers are carefully weighing the risk of getting caught up in the U.S.-China trade war. Huawei has said it plans to do $8 billion worth of business with Japanese suppliers in 2019, up from about $6.6 billion last year.

Sino-American tech frictions look set to increase. Huawei reportedly is preparing to sue the U.S. over its National Defense Authorization Act for fiscal 2019, which banned American government institutions from using Huawei products and those of four other Chinese tech companies.

A sales slump for Apple’s mainstay iPhone has led to declining orders and prices for smartphone components and semiconductors, leaving suppliers with production capacity to spare.