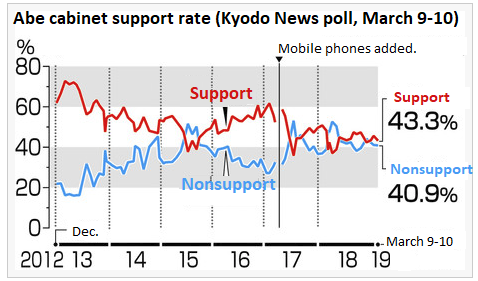 The public support rate for Prime Minister Shinzo Abe’s Cabinet has fallen slightly to 43.3 percent, while some 69 percent want a local referendum that rejected a plan to relocate a U.S. base within Okinawa Prefecture to be respected, a Kyodo News survey showed Sunday.

In the nationwide telephone poll conducted Saturday and Sunday, the vast majority of respondents also indicated their disappointment at the tepid recovery of the Japanese economy, which is now feared to be facing a recession.

The Cabinet approval rate fell 2.3 percentage points from the previous survey in early February, while the disapproval rate was almost unchanged at 40.9 percent.

On the Okinawa prefectural referendum in February regarding the relocation of U.S. Marine Corps Air Station Futenma, 68.7 percent of respondents said the central government should respect the outcome while 19.4 percent said there is no need to do so.

Supporters of the government’s policy to push ahead with the current Futenma relocation plan came to 37.2 percent, down 2.2 points from the previous survey. But opponents also fell to 48.9 percent while those who did not take either side or did not answer the question rose 4.9 points to 13.9 percent.

In the prefectural referendum that was nonbinding on the central government, more than 70 percent of voters rejected the plan to move the base from a crowded residential area of Ginowan to the less populated coastal zone of Henoko. Okinawans have long been frustrated with noise and crimes linked to the heavy U.S. military presence in the island prefecture and want the Futenma base to be moved outside.

The telephone survey also showed that 84.5 percent do not actually feel that the Japanese economy is recovering, even though Abe is apparently counting on the success of his “Abenomics” policy mix to maintain public support for his Liberal Democratic Party ahead of the House of Councillors election in the summer.

Earlier in the month, the government downgraded its assessment of a key indicator of economic trends, which suggested that Japan may have already entered a recessionary phase rather than marking its longest growth streak since the end of World War II, as previously believed.

A total of 54.4 percent opposed Abe’s decision to raise the consumption tax rate from the current 8 percent to 10 percent in October, up 3.4 points from the previous survey. Supporters of the tax hike stood at 39.9 percent, down 5.1 points.

As for the scandal on faulty labor ministry jobs data, which surfaced in January, 70.7 percent of respondents were not satisfied with the outcome of the latest government probe into the issue, which denied there was a systematic coverup. About 13 percent responded otherwise.

The scandal involving sampling irregularities led to the underpayment of work-related benefits to more than 20 million people and cast doubt over the accuracy of government statistics.

As for support rates by party, the LDP remained the most popular with 38.3 percent, followed by the Constitutional Democratic Party of Japan at 10.5 percent.

Abe’s long-standing ambition to amend the postwar Constitution for the first time was opposed by 51.4 percent, while 33.9 percent were in favor.