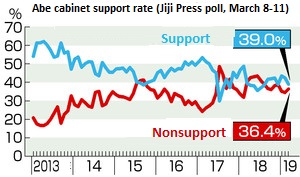 The results seem to reflect public criticism of a statistics scandal involving the labor ministry and the Abe administration’s cool response to a vote by people in Okinawa Prefecture in late February against a planned U.S. military base relocation within the prefecture.

In the latest poll, a total of 2,000 people aged 18 or over were interviewed across Japan. Of them, 61.2 pct gave valid responses.

Of the respondents, 39.5 pct said they expected the Abe administration to make progress on the issue of bringing back Japanese abductees from North Korea, but 48.0 pct said they did not.

Abe has repeatedly expressed his eagerness to have a face-to-face meeting with North Korean leader Kim Jong Un, with the aim of settling the abduction issue.

Following a series of recent child abuse cases, 58.0 pct backed a law revision under government consideration to prohibit corporal punishment by parents for their children, while 20.5 pct opposed it. Meanwhile, 21.5 pct said they could not take either position.

Of the respondents supporting the Abe cabinet, 20.7 pct said there was no other person fit to be the prime minister, 9.2 pct praised Abe’s leadership skills, and 8.8 pct regarded him as trustworthy.

The two parties were followed by Komeito, the LDP’s junior coalition partner, with 2.8 pct, the Japanese Communist Party, with 2.3 pct, Nippon Ishin no Kai (Japan Innovation Party), with 1.4 pct, and the Democratic Party for the People, with 0.7 pct.