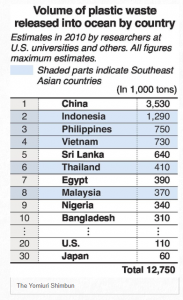 With plastic waste having an evermore serious impact on the oceans, the Environment Ministry is from April to start providing technical support for Southeast Asian countries — the major sources of the pollution — to contain dumping of such waste, it has been learned.

According to sources, the ministry will analyze plastic and other waste drifting in the oceans to help those countries grasp the amounts they are generating and specify their release routes.

Currently, the ministry is considering providing support for Indonesia and one other country, the sources said.

In recent years, plastic bottles and bags have been found inside fish, sea turtles, whales and other marine creatures one after another in oceans around the world. According to estimates by researchers at U.S. universities and others, more than 12.75 million tons of plastic waste were drifting in the world’s oceans in 2010.

The breakdown by country reveals that five Southeast Asian countries, including Indonesia and Vietnam, were among the top 10 marine plastic waste contributors, with waste dumped by the five nations accounting for nearly 30 percent of the global total.

From next month, the ministry will work with institutions including the Tokyo University of Marine Science and Technology and Kyushu University to provide governments, research institutes and other bodies in countries covered by the project with technologies that help identify where plastic waste comes from, according to the sources.

More specifically, the ministry plans to use research vessels to collect plastic waste and fishing boats to estimate the types and amounts of plastic waste in particular sea areas, based on the types and sizes of waste drifting in the oceans, and the frequency of detection by those ships.

Meanwhile, large quantities of microplastics (see below) also have been detected. Microplastics are particles of plastic waste degraded by sunlight and other factors, and it is feared that eating fish and sea shells that have ingested or absorbed microplastics could have negative effects on the human body.

So far, Japan has collected microplastics as small as 0.35 millimeters with special nets, and studied the materials and how they are distributed.

Japan has improved its methods to obtain more accurate survey results on the amount of marine plastic debris and their sources, compared to other countries. The Environment Ministry and other bodies will transfer marine microplastics collection and analysis technologies to help other countries better understand the amounts of waste they are responsible for.

At the summit meeting of the Group of 20 major economies to be held in Osaka in June, the issue of measures against plastic waste will be put on the agenda. Environment Minister Yoshiaki Harada said in January, “We need to present effective measures that involve developing countries.”

Prof. Tadashi Tokai of Tokyo University of Marine Science and Technology, an expert on marine bioscience, said, “We would like to provide opportunities for these countries to change their awareness of the environment by grasping the sources and amounts of marine plastic waste and making measures to reduce such waste.”

Microplastics are small plastic particles of no more than 5 millimeters long. They are said to result from plastic shopping bags, plastic bottles and other such waste which released into oceans and broken into small pieces by ultraviolet rays and waves. Microplastics also adsorb toxic materials in the ocean.