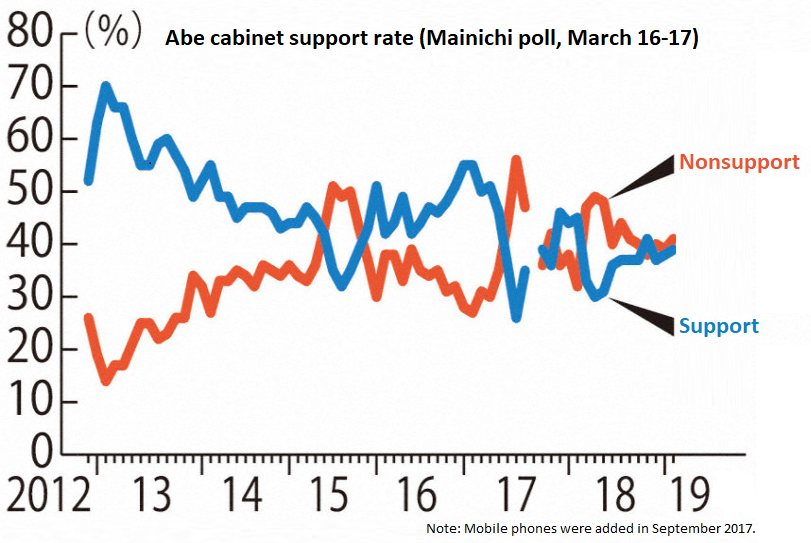 TOKYO — Fifty-two percent of respondents to a Mainichi Shimbun opinion survey are against continuing land reclamation work for the construction of a military base off the Henoko district of Nago, Okinawa Prefecture, to replace U.S. Marine Corps Air Station Futenma in the southernmost prefecture, far surpassing the 29 percent who supported the move.

The nationwide poll, conducted on March 16 and 17, came as the government pushes forward with work to transfer the Futenma airstrip in Ginowan to the south, even after a prefecture-wide referendum on Feb. 24 found more than 70 percent of voters opposed the relocation.

Meanwhile, when asked their thoughts on if a U.S. military base in Okinawa Prefecture was to be transferred to an area where the pollees live, 62 percent said they would oppose such a move, well over the 21 percent who said they would accept it. Seventeen percent did not give any response to the question.

Among respondents who objected to the continuation of land reclamation work off Henoko, 84 percent did not want to see a U.S. military base moved to their own communities, while 10 percent approved such a base relocation.

On the other hand, among respondents in favor of proceeding with the landfill work, 52 percent approved a base transfer to their region, while 42 percent disapproved.

The poll also queried about the Ministry of Health, Labor and Welfare’s statistics irregularities in the Monthly Labor Survey, which resulted in tens of millions of people being shortchanged by tens of billions of yen in work-related benefits. While the ministry’s special inspection commission concluded in its reinvestigation report into the scandal that the ministry provided false explanations but that there was no systematic cover-up of the irregularities, 70 percent of pollees said they were unconvinced by the conclusion. Only 13 percent said they were won over by such explanations.

Even among supporters of the Cabinet of Prime Minister Shinzo Abe, 56 percent answered that they were unconvinced by the panel’s report.

The approval rating for the Abe Cabinet slightly climbed to 39 percent, up 1 percentage point from the previous survey conducted in February, while the disapproval rating rose 2 points to 41 percent.

[Polling methodology: The survey was conducted by pollsters over the two-day period of March 16–17, targeting landline and mobile telephone numbers across the nation on a computer-aided random digit sampling (RDS) basis. The survey excluded landline numbers in municipalities designated as “difficult-to-return” zones due to the Fukushima Daiichi Nuclear Power Plant accident. Valid responses were received from 418 persons (out of the 741 households with one or more persons age 18 or over) for landline numbers and 525 persons (out of the 646 persons age 18 or over who answered) for mobile numbers. The valid response rates were 56% for landline numbers and 81% for mobile numbers.]