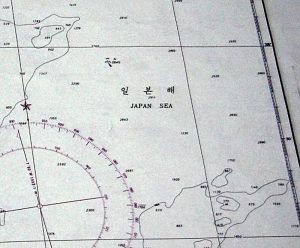 South Korea used the name “Japan Sea” for waters it claims should also be referred to as the “East Sea” in nautical charts it released the year after Seoul raised the issue with the international community, a Japanese academic recently discovered.

Rikinobu Funasugi, an associate professor of historical geography at Shimane University, has studied the South Korean charts and discovered that they include the term “Japan Sea.”

South Korea raised the naming issue at a U.N. conference in 1992 and has since been claiming that “East Sea” has been used to describe the sea for 2,000 years.

In the fourth edition of the chart released in 1977, the Sea of Japan was referred to as the “East Sea,” but with “Sea of Japan” in brackets.

“These nautical charts show how the South Korean government’s claim has no validity and back the fact that it is contradicting,” said Funasugi.

A Japanese government official also said, “It can be said that these charts prove that there is no consistency in Seoul’s stance.”

Seoul has been calling for revising the guidelines of the International Hydrographic Organization (IHO), which refer to the waters solely as the “Japan Sea.” The IHO has demanded Tokyo and Seoul hold informal talks to discuss the matter. The schedule for the talks and other details are currently being arranged.