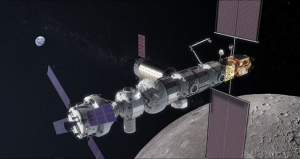 Japan’s space agency plans to take charge of development of a habitation module and an unmanned logistics vehicle for the Gateway cislunar space station as part of an international project.

The project, led by NASA, has set a goal of landing a manned spacecraft on the moon’s surface in 2028, the first of its kind since the end of the U.S. Apollo project in the early 1970s.

The Japan Aerospace Exploration Agency (JAXA) hopes to showcase the country’s excellence in technologies with an eye toward having a Japanese astronaut included in the lunar mission.

JAXA plans to work with its European counterpart to develop the habitation module by drawing on technologies it cultivated during the development and operation of the International Space Station’s Kibo experiment module, including one for recycling air and water aboard a spacecraft.

It also plans to take charge of resupplying goods using the HTV-X, a spacecraft under development as a successor to the Kounotori (HTV) unmanned transfer vehicle, seven units of which have been launched successfully.

The project would have astronauts stay for an extended period on the lunar surface while using water and other resources that potentially exist on the moon.

It has been studied by officials from Japan, the United States, Europe, Russia and Canada, all participants in the ISS. They agreed on the job allotments during a meeting on March 5.

Construction of the Gateway will begin in 2022, with completion scheduled for sometime around 2026. With a weight of 70 tons, about one-sixth that of the ISS, the space station will enable four individuals to stay for 30 days.

Officials plan to use the Gateway as a link between Earth and the moon’s surface and as a relay station for a Mars mission.

NASA officials said the United States will take charge, among other things, of equipment for supplying power and propulsion to the Gateway and of the new Orion spacecraft for flying between the space station and Earth. Russia and Europe will be in charge of multipurpose and support modules, while Canada will take charge of a robotic arm.

The ISS program has cost about 10 trillion yen ($90 billion) over two decades in development and maintenance expenses. Japan has covered about 1 trillion yen.

While the total cost of the new project remains unknown, JAXA has tentatively calculated that ground-based development and manufacturing of the Gateway would cost 310 billion to 420 billion yen, excluding expenses for launch and other operations.

(This article was written by Keisuke Katori in Washington and Tetsuya Ishikura.)