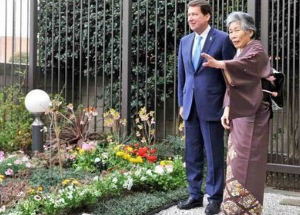 U.S. Ambassador to Japan William Hagerty and a woman look at the planted sapling of “Scidmore cherry blossoms” at the U.S. Department of State’s FSI Yokohama Japanese Language and Area Training Center

A commemorative ceremony was held on March 15 to plant a cherry blossom sapling at the U.S. Department of State’s FSI Yokohama Japanese Language and Area Training Center in Naka Ward, Yokohama City. The sapling was grafted from a “Scidmore cherry tree,” one of those given to the U.S. by Japan in 1912 as a symbol of mutual friendship. Participants celebrated the friendship that lasts more than a century.

The Scidmore cherry blossoms were named after Eliza R. Scidmore (1856-1928), an American travel writer fascinated by rows of cherry trees she saw in Japan. She suggested donating cherry trees to the U.S. Then Tokyo Mayor Yukio Ozaki, who is originally from present-day Midori Ward, Sagamihara City, sent 3,000 saplings to the U.S. They were shipped from Yokohama Port to the U.S. and were planted along the Potomac River in Washington, D.C.

The young cherry tree, planted this time at the event, has been grown by “Scidmore sakura no kai [Scidmore cherry blossoms association].” It was grafted from Washington’s cherry blossom trees that came back to Japan in 1991. The sapling was donated to the language training center in token of friendship between Fumiko Umezawa, a member of the association and the owner of the restaurant Konomichi in Yokohama’s Naka Ward, and Carmela Conroy, director of the language center.

At the ceremony, U.S. Ambassador to Japan William Hagerty said, “The young cherry tree planted here is a testament to our fast friendship.” He also visited the Yokohama Foreign General Cemetery in Naka Ward and offered flowers at the grave of the Scidmore family, where the Scidmore cherry trees were planted in 1991.