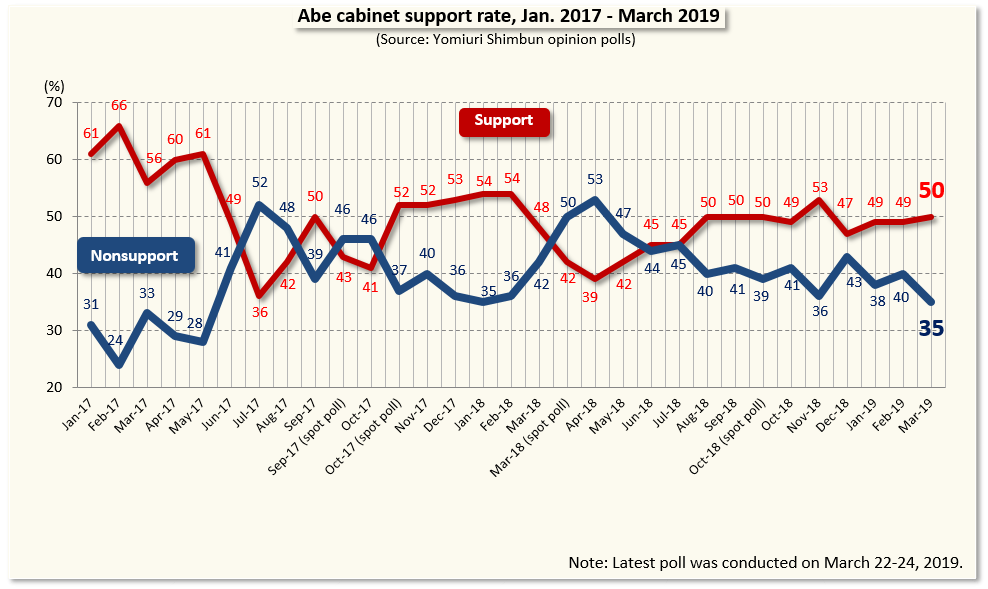 Given the fact that the government has submitted a bill to revise the Child Abuse Prevention Act to the current Diet session, the Yomiuri Shimbun’s nationwide public opinion poll conducted on March 22–24 probed views on legally banning the physical punishment of children by their parents. Some 59% of respondents said they are “in favor” of the ban, exceeding the 24% who said they “oppose” the idea.

Across all age groups, those in favor of the ban exceeded those opposed. There was some difference in views by age group, however. Slightly less than 70% of those in the youngest age group, namely, those aged 18–29, said that they approve of the ban, whereas support among those in their 30s through 60s was in the 50% range and among those age 70 or over was 60%.

A proposal has arisen in the Liberal Democratic Party (LDP) to allow Prime Minister Shinzo Abe to have a fourth consecutive term as party president. Asked if they think it would be good if Prime Minister Abe continued to serve as prime minister after his term ends in September 2021, some 51% of respondents said no, exceeding the 35% who said yes. Some 56% of ruling party supporters said it would be good for Abe to continue, exceeding the 31% who thought otherwise. The Prime Minister himself has denied the possibility of a fourth consecutive term, because the LDP Constitution limits the president’s tenure to “up to three consecutive terms for a total of nine years.”

[Polling methodology: The nationwide survey was conducted on March 22–24 on a computer-aided random digit dialing (RDD) basis and targeted voters aged 18 or over with calls placed to landline and mobile phone numbers. Valid responses were received from a total of 1,053 persons, including 528 persons (out of the 914 households with one or more eligible voters) for landline numbers and 525 persons (out of the 1,238 persons who answered) for mobile numbers. The valid response rates were 58% for landline numbers and 42% for mobile numbers.]