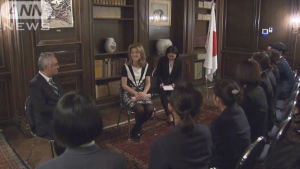 TV Asahi reported online this morning that 24 high school and university students from Okinawa who are currently visiting the U.S. met with former U.S. Ambassador to Japan Caroline Kennedy yesterday. The former Ambassador expressed delight that the students are learning about the U.S.-Japan alliance from a broad perspective. She was quoted as telling them: “The future of the U.S.-Japan alliance, which is the strongest and most important alliance in the world, depends on Okinawa,” encouraging the students to broaden their understanding of the security alliance. The TV network said that the Okinawan students are on a one-week visit to the U.S. under a Japanese government program to promote better understanding of the bilateral alliance. They traveled to New York for discussions with UN officials, visited the White House and other U.S. government offices, and exchanged views with American students in Washington before their meeting with the former Ambassador.