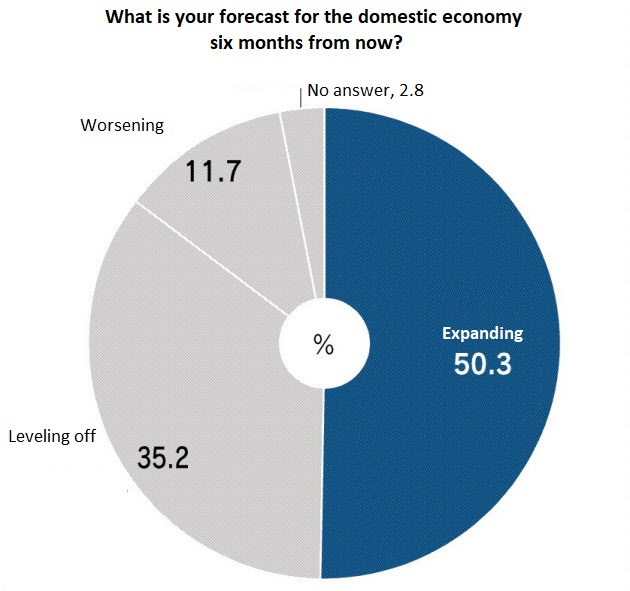 According to the Nikkei’s questionnaire survey of the presidents of 100 major Japanese companies, about half of the executives said the domestic economy will be “expanding” in a half a year’s time. The Japanese economy will be undergirded at that time by solid capital investment in addition to the last-minute rise in demand before the consumption tax hike in October. About 30% of executives said that the slump in sales after the tax hike will be “less than 5%” while another 30% said that “sales will not go into a slump.” Many executives said that it will have a negligible impact on their corporate revenues compared with the prolonged slump after the previous increase in the consumption tax.

Executives have a positive outlook for the domestic economy in six months’ time (around September 2019). Over half (50.3%) said that the economy will be expanding six months from now. This figure is about 7 percentage points lower than the previous survey conducted in December 2018. Some 11.7% of executives said they anticipate the world economy will be “worsening” in half a year’s time [compared with today].

Asked why they think the economy will be expanding in September (up to two responses permitted), executives said “increase in capital investment” (50.7%), “recovery in personal consumption” (45.2%), and “last-minute rise in demand before the consumption tax hike” (42.5%).

Toray Industries President Akihiro Nikkaku said, “With the continued improvement in the employment and income environments, policies will be effective and moderate economic expansion led by domestic demand will continue.” Kirin Holdings President Yoshinori Isozaki explained: “I anticipate consumption will expand as Japan will enter a new era [with the imperial abdication and ascension] and will host the Rugby World Cup this year.”

Toyota Motor has decided to make an additional investment worth $750 million in the United States to increase production of hybrid vehicles and components. Turning to domestic investment, Shiseido will increase factories from the current three to six in stages by 2021. The aim is to meet the brisk demand for cosmetics among foreign tourists. Workman Co., Ltd., which sells work clothes for manual laborers, plans to open more of its popular new stores that sell their private brand of outdoor clothes.

Some 10.3% of company executives said that the last-minute increase in demand before the consumption tax hike “is impacting” their sales. This figure is lower than the 17.8% found in the poll conducted about half a year prior to the tax hike in April 2014.

To prevent a drop in consumption after the tax hike, the government plans to lower the automobile tax and to allow homeowners to deduct mortgage interest from their income tax bill for a longer period. The government is also readying various economic countermeasures, including offering reward points to those who make purchases by noncash means and implementing reduced tax rates on food and the like.

Daiwa Securities Group President Seiji Nakata says, “The consumption tax hike is a minus, but the government plans to increase annual expenditures on a larger scale than the tax hike and I anticipate that will have a positive impact.”

[The Nikkei questionnaire survey targets presidents (including chairpersons) of major Japanese companies once every three months. The recent poll was taken on March 4–19. Responses were received from 145 companies.]