The Japan Meteorological Agency says the average density of carbon dioxide in the air over the country hit a record-high level last year at all fixed-observation points..
The agency has been monitoring CO2 density in the atmosphere at three sites in Japan: Ofunato City in northeastern Honshu, westernmost Yonaguni Island in Okinawa Prefecture, and easternmost Minamitorishima island in the Pacific.. 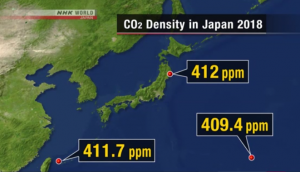 The average density of carbon dioxide in Ofunato last year was 412 parts per million. It was followed by 411.7 ppm in Yonaguni and 409.4 ppm in Minamitorishima.

Scientists at the UN Intergovernmental Panel on Climate Change project that a global average CO2 level of about 420 ppm is the upper limit to contain a rise in temperature to below 2 degrees Celsius by the end of this century.

But the three monitoring sites in Japan have been setting new high records every year. If this trend continues, the CO2 level of over 420 ppm could be reached in about five years.

Agency officials say consumption of fossil fuels is likely to be driving the steady rise in the average density of CO2 in Japan. They are calling for further promotion of emissions cuts.