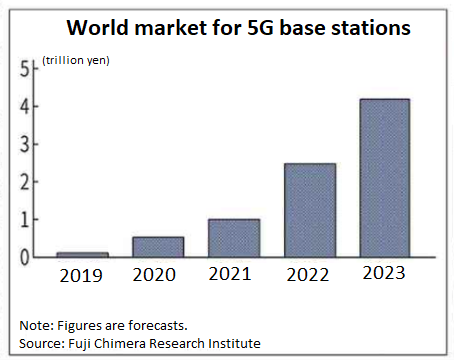 For telecom equipment majors that develop mobile phone base stations, the dawn of “5G,” the fifth generation of wireless network technology, is a huge business opportunity of the kind that comes only once a decade. While China’s Huawei and Sweden’s Ericsson release products that will enable the smooth roll-out of 5G, start-ups are also entering the fray. Will this usher in a new era in this market that has traditionally been dominated by a few equipment majors?

“We have created a base station using software on an ordinary server without any high-priced specialized hardware,” says a representative of Chinese start-up Baicells. “And it costs a fraction of the amount charged by the telecom equipment giants.” Members of Huawei’s R&D department spearheaded the launch of Baicells in 2014. Baicells products have been adopted by China Mobile, the world’s largest mobile phone operator, and they are being introduced at small-scale operators in the U.S.

Specialized equipment used to be required for base stations, but now ordinary servers have enhanced processing capabilities and can operate a base station just with software. The market used to be the exclusive domain of telecom equipment giants like Huawei and Ericsson, but now start-ups are entering the market one after the other.

Mavenir of the United States is one such company. “On this ordinary server, we can operate all base station operations from the core network to the station itself. The services are superb, too,” said a Mavenir representative at MWC19 Barcelona [formerly Mobile World Congress], a mobile phone trade fair held at the end of February in Barcelona, Spain. At the fair, Mavenir demonstrated how communications can be done using a smartphone via a mobile phone network.

It is said that wireless base stations account for almost 80% of the capital investment made by mobile telephone operators. If base station operations can be configured using software operated on an ordinary server, it would mean major cost cuts.

Huawei, Ericsson, and Finland’s Nokia have an 80% share of the base station market, however. With wireless base stations today, it is common to split the signal-processing function and the antenna function, which sends and receives wireless signals. Using standard specifications, the antenna function and the processing function can be performed by combining the products of different telecom equipment makers.

In principle, therefore, it should be possible to flexibly introduce start-ups’ equipment. In reality, however, the telecom equipment giants promote single-vendor base stations, and in most cases the base station will not operate unless all the equipment is made by the same manufacturer. Because 5G will be rolled out using existing 4G equipment in many cases, the telecom equipment majors, which have a large share of that market, are at an overwhelming advantage. 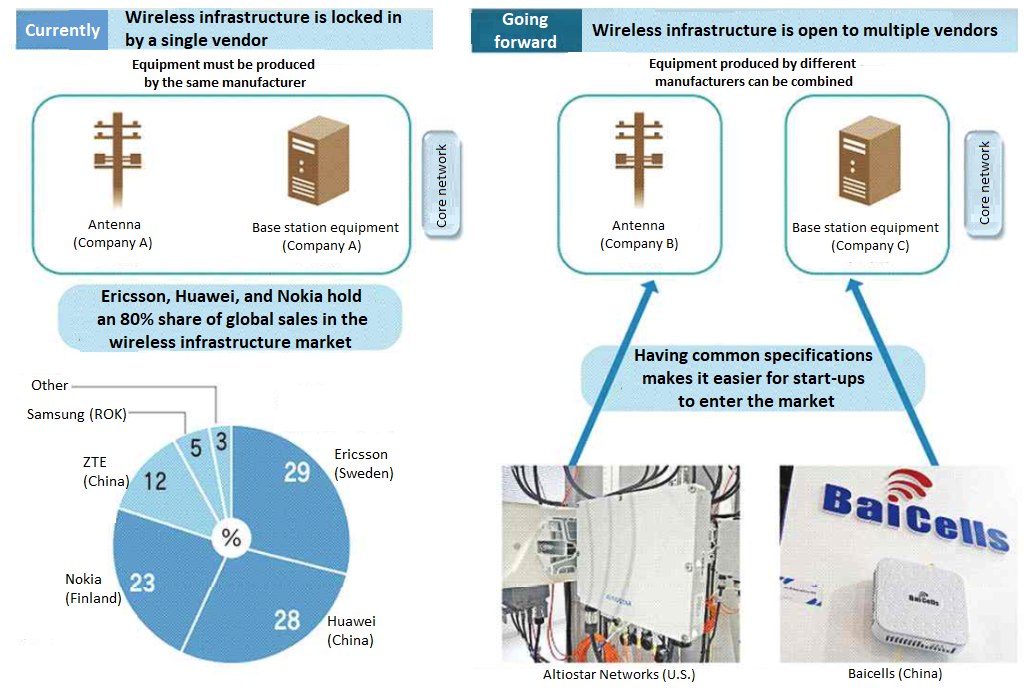 NTT Docomo and others take action

Telecom carriers around the world have started to join hands with an eye to breaking the telecom equipment majors’ oligopolistic hold on the market. O-RAN Alliance is an initiative NTT Docomo, China Mobile, America’s AT&T, and other major companies kicked off in 2018.

“After only one year, O-RAN had 20 carriers and 54 telecom equipment manufacturers in its membership,” boasted the O-RAN representative at a press conference at MWC19 Barcelona.

O-RAN’s aim is to move the base station market out from under the grip of the equipment maker giants. “Until now the range of equipment options was narrow because it was hard to introduce equipment other than that produced by the majors,” said an O-RAN representative. O-RAN aims to block major manufacturers from promoting a single-vendor framework. At the end of February, O-RAN announced common specifications that allow the equipment produced by a variety of manufacturers to interconnect. If start-ups’ equipment can be used in some parts, it means costs can be lowered. MWC Barcelona featured demonstrations based on these O-RAN specs.

Rakuten will enter the mobile operator business in October. By actively harnessing the new developments in the base station market, the company intends to roll out services at a cost that is out of the reach of current operators. “Rakuten will be the first company in the world to roll out [a network] that uses software even in the wireless base station segment!” proclaims Rakuten Mobile Network Chief Technology Officer (CTO) Tareq Amin. Rakuten Mobile is Rakuten’s mobile subsidiary.

Rakuten Mobile found its own way to get around the telecom equipment majors’ hold on the market before O-RAN did. Rakuten Mobile will use Nokia equipment for the antenna portion of the base stations and Altiostar Networks software for the base station processing functions. Because the equipment uses ordinary servers “Rakuten Mobile will be able to create a network at a substantially lower cost than in the past. Existing mobile phone operators will not be able to keep up with us easily because they already have introduced equipment,” says a confident Amin.

Huawei, Ericsson, and other telecom equipment giants are still in the game, though. “Our 5G base station weighs only 20 kilograms,” said the Huawei delegate at the company booth at MWC Barcelona. “A single worker can easily install it.”

It also means area roll-out for 5G will take less time. South Korean cellular carrier LG Uplus Corp. adopted the Huawei products and apparently was able to set up 10,000 base stations in a mere four months.

Leveraging its high share of the 4G market, Ericsson is making a case for its products that can operate 4G and 5G at the same time using the same frequency band. Traditionally, companies had to secure 4G frequency bands and 5G frequency bands separately. If they can use the same product [for 4G and 5G], though, mobile phone operators will be able to smoothly transition from 4G to 5G.

As the 5G sales war gets into full swing, it is clear that telecom equipment majors and start-ups will be engage in competition. Now that base stations can be operated with software on ordinary servers and multiple vendors’ products can interconnect, it may bring a change that revolutionizes the market.