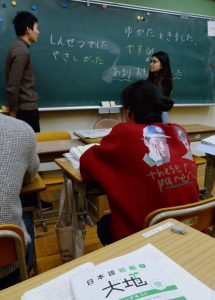 Pariyar Sonar is one of some 40 young foreigners who attend evening classes at Futaba Junior High School in Katsushika Ward, Tokyo. The 17-year-old Nepalese girl came to Japan a year ago to join her parents who had moved here earlier in pursuit of a better life. She eagerly participates in Japanese classes that consist of students from the Philippines, China, and various other countries. On weekdays, she works in housekeeping services at a hotel in central Tokyo to help her family make ends meet. When she performed Nepalese dance at a school festival last year, she was delighted to receive enthusiastic praise from the Japanese audience. Now she hopes to stay in Japan for as long as possible and maybe someday teach Nepalese dance to locals. “Mastering Japanese is essential to realizing my dream,” says Pariya, adding: “I would like to go on to high school to study further.”

Night schools in Japan were once geared toward local citizens unable to receive an education when they were young for one reason or another. However, the schools are now expected to primarily serve students from overseas. According to Nikkei (1/28) and Yomiuri (1/25), there were 31 night middle schools in eight prefectures across Japan as of last year, with some 1,700 students attending, of whom 1,200 were foreigners. Since many of those foreign students are not fluent in Japanese, most night schools offer special language courses. The demand for the Japanese lessons should remain strong because the country is set to host as many as 345,000 foreign laborers over the next five years beginning in April under a newly created visa program to address the chronic labor shortage in certain sectors. Since these workers will be allowed to bring their dependents with them, the Japanese 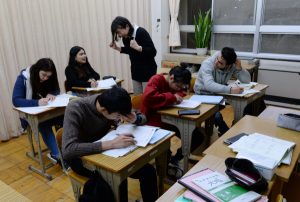 government anticipates a surge in the number of foreign minors who wish to enroll in free night schools. About 70 such schools may be opened eventually around the country, and the Education Ministry is encouraging all 47 prefectural governments to launch at least one night school.

Night school teachers are reportedly keen to help foreign students settle in successfully because they know firsthand how much they struggle to balance their academic work at night and demanding manual labor during the day. Futaba Junior High School arranges interpreters for Nepalese and Chinese students several times a week so that they can get advice on how to study and live in Japan. The school’s deputy principal stresses that foreign students are initially more open-minded toward teachers and counselors when communicating in their own languages. A spokesperson of the board of education in Kawaguchi, Saitama, where foreigners account for 5% of the population, explains that when a new night school opens there this spring, educators will need to be flexible in grouping and dealing with foreign students from diverse ethnic, cultural, and religious backgrounds.

Meanwhile, Toyo Keizai (4/1/2018) reported that some Japanese students who enroll in night school in the hope of making up for lost learning opportunities are disheartened to discover that most evening courses are now tailored toward foreigners who speak little Japanese. Some of these Japanese reportedly end up dropping out after realizing that their thirst for knowledge cannot be quenched since the courses offered in Japanese are too “rudimentary.” Former Vice Education Minister Kihei Maekawa, who has been actively involved in lifelong education by teaching courses for Japanese students at night school since he retired a few years ago, says there is a huge gap between what Japanese and foreigners want to learn at night school. Many Japanese reportedly hope to study various basic subjects so they can attend institutions of higher education later, whereas most foreign students view evening courses as a place to acquire basic Japanese language skills. While explaining that some of the million or more Japanese who failed to complete compulsory education are eager to go back to school, the former government official underscores that the central government must commit more financial resources to night schools so they can meet the needs of both Japanese and foreign students.