Baito tero is a term that combines arubaito (part-time job) and “terrorism” to refer to online videos or photos of pranks and stunts by employees at restaurants, convenience stores, and other food-related businesses. These pranks are seriously compromising the reputations of companies and have resulted in substantial financial losses in some cases.

The term baito tero is said to have been coined by the Internet-based news site Byokan Sunday in a report on Aug. 3, 2013, and was later adopted by traditional media outlets as well. The perpetuators of such mischief have also come to be known as bakatta a term coined in the same year from the words baka (idiot) and “Twitter.”

Although this phenomenon has been around for a while, it is now being regarded as a social problem due to the recent wave of high-profile cases involving well-known companies. Major non-life insurers such as Sompo Japan Nipponkowa and Mitsui Sumitomo Insurance started offering insurance coverage for damages from baito tero in 2017, and other companies have followed suit. Sompo Japan reported a 30% increase in such insurance policy subscriptions last year. (Yomiuri 3/23)

A case last December involved a video of a part-timer at the karaoke chain Big Echo rubbing pieces of chicken meat on the floor before frying them. The company apologized immediately and reported the incident to the police. Yet in February this video was reposted on the Internet and subsequently downloaded more than 1 million times, forcing the company to apologize again and announce measures to prevent a recurrence. 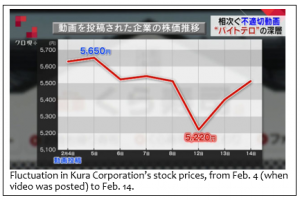 Another prominent case was an Instagram post in January showing a male part-timer at the major beef bowl chain Sukiya throwing ice on the floor and another placing a ladle on his groin.

In yet another case in early February, a video posted online showed an employee of the conveyor sushi chain Kurasushi making sushi from fish he’d thrown into and retrieved from a garbage can, sparking a boycott by Internet users and a deep plunge in the stock price of Kurasushi’s parent company, resulting in a loss of 2.7 billion yen. The company immediately fired the two employees responsible for the video and announced legal action would be taken against them.

Similar videos showing unhygienic or inappropriate acts by employees have plagued the convenience stores Family Mart, Seven-Eleven, and Lawson; the restaurant chains Bamiyan and Otoya; and the beef bowl restaurants Yoshinoya and Matsuya, to name just a few. Lawson is said to suffer from nearly 100 unsavory online postings each year.

While these videos and images mostly started as pranks meant to be shared among a small circle of friends, they ended up becoming viral posts and causing financial and other damage not only for the businesses concerned, but also for the perpetuators themselves.

In its “Close-Up Gendai+” program on Feb. 14, 2019, NHK took up the question of why baito tero persists. On the one hand, a business consultant argued that while businesses need to improve their supervision and education of part-time employees, it is unacceptable for workers to play such pranks regardless of whether they have valid grievances against their employers because they are paid to perform their jobs properly. On the other, an NPO official working on labor issues asserted that it is understandable for disgruntled part-timers being paid a minimum wage and with no job security to vent their discontent and that they can’t be held responsible since they earn much less than their full-time colleagues.

The program showed opinions contributed by viewers, a majority of whom criticized the online pranks even though many also expressed sympathy for the underpaid and overworked part-timers. The network observed that both employers and employees have much to do to create a sound working environment and improve the workers’ moral standards.

The program also noted that the spread of social media, particularly the Instagram Stories function, which enables easy posting and dissemination of images that are supposedly only stored for 24 hours, contributed significantly to the recent proliferation of baito tero. Byokan Sunday has suggested that this term is a strong candidate for buzzword of the year in 2019.