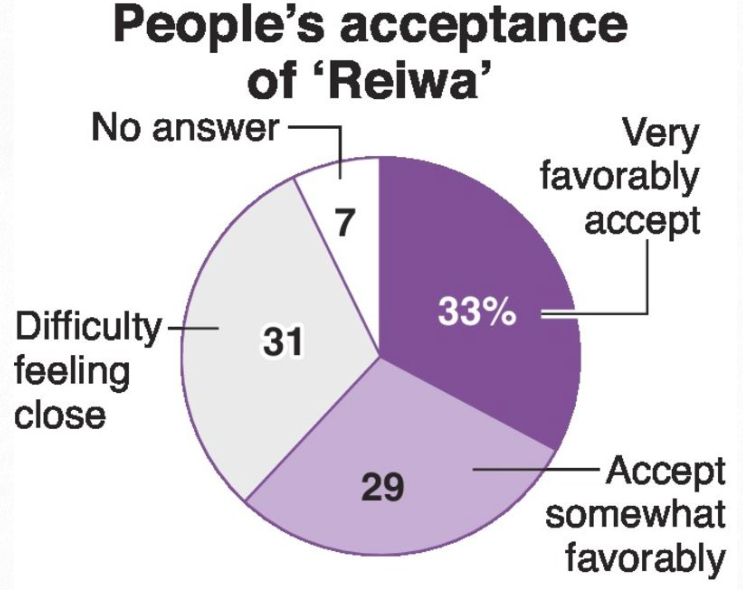 Sixty-two percent of respondents favorably accept the new era name of Reiwa, while 31 percent are having difficulty feeling close to it, according to a Yomiuri Shimbun survey conducted on Monday and Tuesday in response to the announcement of the name.

The survey also showed that those who answered that the start of the new era on May 1 would change the atmosphere of Japanese society was 31 percent, less than half of the 64 percent who replied that it would not.

When those who answered that they favorably accept Reiwa were asked about the degree to which they like it, 33 percent said “very much” and 29 percent replied “somewhat.”

In a survey with the same questions and options conducted in January 1989 when the Heisei era started, a total of 61 percent favorably accepted Heisei — the results were 27 percent for “very much” and 34 percent for “somewhat” — while 33 percent said it was hard to feel a sense of closeness to it.

The rates of “likability” and “difficult feeling closeness” with Heisei and Reiwa were thus almost the same.

Prime Minister Shinzo Abe explained on Monday that Reiwa carries the connotation that “culture will be born and grow among people who care for each other in a beautiful manner.”

The rate of those who think that this connotation is suitable as an ideal for the people was 82 percent. Respondents who think that Reiwa is easy to write reached 78 percent and 76 percent think it is easy to read.

Reiwa, which was derived from the “Manyoshu,” Japan’s oldest poetry anthology, is the first era name sourced from classical Japanese literature, as far as it is possible to confirm.

Eighty-eight percent have a high opinion of Reiwa being derived from Japanese literature.

50% to use both Reiwa, Western

These figures were the highest given for any answer in these age groups. Although for those in their 70s or older, almost the same high rates of answers were given for both using the Japanese year, and using it and the Western year.

Among those who support the continuation of the era system, 53 percent answered that they will use both the Japanese and Western years, while 25 percent chose only the Japanese year.

In the latest survey, following the announcement of Reiwa, those who replied that they will use both reached 50 percent, indicating that the number of people using both could rise further. 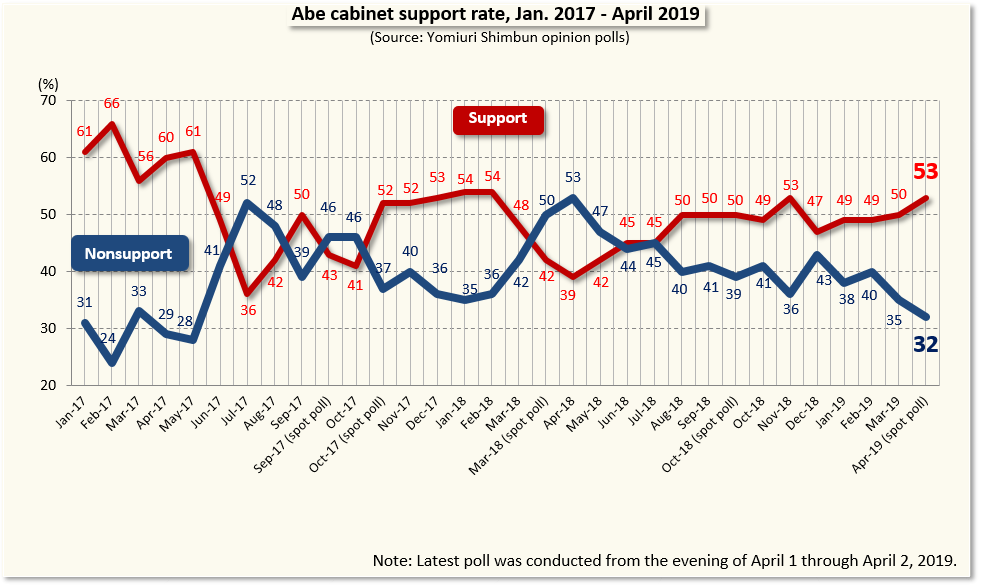 The latest survey was conducted by polling 936 households on landlines and 1,376 mobile phone users who were sampled with a random digit dialing method. All respondents were eligible voters 18 or older. Of them, 1,073 people — 502 on landlines and 571 on mobile phones — gave valid answers. (JMH added cabinet support rate graph.)