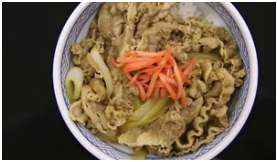 Frozen beef rib imported from the U.S. to Japan is falling in price. It is used for “gyudon” beef bowl and other meals. The part called short plate [of beef] is a bellwether of beef prices in Japan. As of early April, 1 kg of short plate cost between 650 and 680 yen, down about 15% compared with the same month a year ago. As China imposed a retaliatory tariff on American beef last year on account of the U.S.-China trade conflict, supply to Japan has increased and the price declined here.

Around 600 yen is the lowest price in 1 year and 11 months. The price is about 12% cheaper compared with the beginning of this year.

While China imposes additional tariffs on U.S. beef, the PRC imports more Australian beef. As a result, much of the surplus of American beef was imported to Japan and, consequently, the price dropped.

Short plate is used for “gyudon” beef bowl and “shabu-shabu”  in Japan. Chinese consume much of the short plate for hot pot. The consumption of  short plate increases in China during the lunar New Year. The end of the Chinese lunar New Year period also led to the lowering of the price in Japan.

A period of 10 consecutive holidays will start at the end of April in Japan. Demand for U.S. frozen beef may increase during the holidays as more people are expected to enjoy Korean-style “yakiniku” barbecue outdoors. The U.S. and China continue discussing measures to end the trade conflict. “Depending on discussions between the U.S. and China, the price may rise,” said Sojitz Foods Cooperation beef department manager. 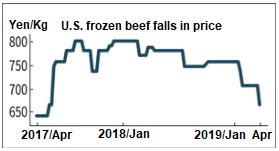